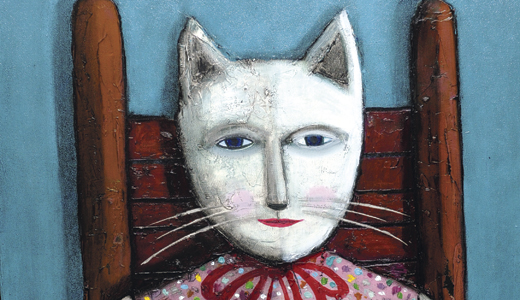 Ever gasp at the grace of a golden retriever running through wildflowers? Does the soft purr of a kitten evoke a Handel’s Messiah high? Perhaps you just like to doodle pigs with bowties? The point is, animals and art mix well. The Shamrock Foundation recognizes this. So for the 16th year, it’s throwing an Art for the Animals fundraiser. The event will include music, food, beer, wine, bourbon, and, naturally, art. A live and silent auction will showcase original artwork from both local and national artists. Even if you’re not an animal lover, this event should hold some appeal. For 20 years, the Shamrock Foundation, a nonprofit, all-volunteer organization, has helped curb pet overpopulation through spay/neutering programs. —Anne Marshall

It’s at the point now where every musician’s heard everything, and fusions like Southern rock bands absorbing the gentler, more bookish sounds of indie rock are not even that odd. Soaking up inspiration far beyond the cheap booze, broads and bullets of the previous generations, Atlanta’s Ponderosa has been picking up steam with their promising blend of Black Crowes and Fleet Foxes, making them ideal, demographically, for Paste magazine and a public radio-friendly Louisville audience. Their second album, Pool Party, released July 31, was produced by Dave Fridmann, whose work with MGMT, Mercury Rev, The Flaming Lips, and Sleater-Kinney has earned him much acclaim. With Vinyl Thief and Jet Black Orchid. —Peter Berkowitz

Beyond the endless aisles of “Fall & Harvest” decorations, sumptuous scrap-booking supplies, silk flowers and yarn, some dark secrets and family drama arise in this Boise, Idaho, Hobby Lobby store. Director Doug Schutte and the Bard’s Town Theatre bring to Louisville for the first time Samuel D. Hunter’s OBIE (Off-Broadway Award)-winning play, in which a former evangelical takes a job at the Christian craft supercenter to try and reconnect with his son. “Very early on, we knew we wanted to build a theater that did two things: develop new work by Kentucky playwrights, and bring new and innovative work being done in New York into the Louisville theater landscape,” says Schutte. “‘A Bright New Boise’ is the perfect beginning to the development of our mission.” —Jane Mattingly

If you don’t know Rosco Bandana yet, that’s fine … for now. But that will change. This Gulf Port, Miss., band, led by songwriter Jason Sanford, won the massive Hard Rock Battle of the Bands in 2011, landing them in London on the main stage of the giant Hard Rock Calling music festival. And earlier this year when Hard Rock decided to launch a record label, they decided Rosco Bandana should be their flagship artist. They’re a kick-ass Southern rock band with influences as varied as Elliot Smith and Neutral Milk Hotel to Uncle Tupelo and Jamey Johnson. And their infectious ear for hooks promises this band won’t be ignored by the mainstream for long. So catch them Friday, when they play the Hard Rock Café on their way to Chicago for Lollapalooza. —Brent Owen

Tired of dropping off your teens at the pool or the mall? Sure, school is just around the corner, but before then, the Louisville Free Public Library is offering up Animecon 9 — the annual Japanese-style animation and Asian culture convention. Friday is geared toward 12-19-year-olds with anime screenings, workshops, costume contests and a samurai presentation by the Frazier History Museum. Saturday’s festivities are for 5-11-year-olds and feature games, contests and more. Animecon is part of the library’s Summer Reading Program. Go to lfpl.org to register. —Sara Havens

In the second grade, during a game of kickball, I dashed across home base and immediately fell face first on the blacktop. Sharing stories of wiping out and comparing scars can bring people together, but when the hurt runs deep, like Kayleen and Doug’s, a friendship can, too. Otherwise polar opposites, the 30-year pals share their physical and emotional pain in this dark comedy. “Rajiv Joseph is such a smart writer, and, with ‘Injuries,’ he carefully guides us through two complete lives, encompassing the incredible highs and devastating lows that come with trying to love somebody, to love yourself, and to just live through it all,” says Theatre [502] co-artistic director Gil D. Reyes. “It turns on a dime from hilarious to tender to brutal; a real feast for audiences.” —Jane Mattingly

The Wayside Expressions Gallery showcases oil painter Betty Meadows this month with her exhibit “God’s Special People,” a nod to the little folks who now run carelessly through parks and will one day come to debate Social Security. Meadows’ activism shines through in her paintings as she focuses on the children she sees, the young souls destined to be great. In the feature piece, “Not Quite Mischief,” she takes her love of religion and blends it with the natural curiosity inherent to every child. Meadows’ religious influence comes from her leadership in the Presbyterian Church for more than 15 years, while her fancy for painting spans over two decades. —Allison Ray

Masters of imagination Squallis Puppeteers are going back to basics with their take on Rudyard Kipling’s classic “The Elephant’s Child,” the story of a baby elephant whose insatiable curiosity leads to a run-in with a crocodile (and, ultimately, an extra-long trunk). Rather than use the elaborate, extra-large puppets Squallis is known for, puppeteer Robin Schotter-Davis uses simple shadow puppets to tell this children’s tale, which is set to an original soundtrack by local musician Justin Schotter-Davis. For an extra $5, audience members can participate in a puppet-making class after the performance, part of Squallis’ First Saturdays Puppet Show and Workshop Series at its new permanent home, School of Sharks Theater, at Our Mother of Sorrows School. —Sarah Kelley

Just in case you ever got off the Rufus Wainwright bandwagon, this is a most excellent time to get back on. After several years where his recordings were dominated by their themes or selected extremes in arrangement (yet he pulled most of ’em off with style; no “Neil Young in the ’80s” here), Wainwright has made a determined step forward into the past. Recent release Out of the Game is a return to the style of his first few discs, with a singer-songwriter’s band giving luxuriant support, but the accompaniment isn’t full-on orchestration. Perhaps now he’s realized his songs’ ironic twists and dramatic arcs don’t need a lot of baggage in tow — but his slightly-thin-yet-emotionally-rich vocal performances definitely benefit by bouncing off more than a single instrument (with occasional exceptions). —T.E. Lyons

Russian Circles is one of the heaviest instrumental acts you’ll find, traversing a flowing line between calm ambient rock and thundering metal riffs, while avoiding the too-lengthy-song trap that consumes post-rock. Instead it rips your face off, no bath salts included. They return to Louisville in support of Empros, their fourth full-length and most dynamic yet. Joining them is Chelsea Wolfe, a lo-fi singer-songwriter affair covered up in a goth veneer. The ethereal floating rock of Marriages rounds out the mix, made up of three members of post-rock collective Red Sparrows. If you’re looking to experience an eclectic mix of engaging music, come and enjoy what will be an aural fandango feast. —Austin Weber

We all feel the pressure of our daily lives (I’m feeling it right now with my looming deadline). So it makes perfect sense artists feel it, too, with the advantage of creating visual expressions. “PRESSURE” is an exhibition curated by The Ground Floor Gallery. “(The artist) JMS’ large-scale (pieces) surround viewers with sumptuous woods and highly polished surfaces that make you want to engage with them tactilely,” says Ground Floor’s Jesse Levesque. “The text on the gallery walls … by AJB reflects parts of the visual show in words. And Alex Ferguson-Bell’s soundtracks … help you to literally feel the show through pulsing beats …” The closing reception will be held during the Aug. 3 First Friday Trolley Hop from 6-9 p.m. Cocktails and bar snacks will be served, compliments of MEAT. —Jo Anne Triplett

The Kentucky Museum of Art and Craft has recently added two exhibitions on display during the summer. “Swimming Hole” showcases the art of Matthew and Mitchell Bradley. The twins create art together and have produced a child-inspired, site-specific wall sculpture for the third floor near the education classrooms. Summer curatorial intern Cecilia Adwell organized “Hollers and Harvests,” an exhibition of farm-related folk art from KMAC’s permanent collection. “The works in this show illustrate how agriculture informs every facet of Kentucky life, including cultural production,” she says. Adwell is a student at the California College of the Arts in the Masters of Arts in Curatorial Practice program. Also on view in the exhibition is the sound installation “Kentucky Monolith” by Russel Hulsey. —Jo Anne Triplett