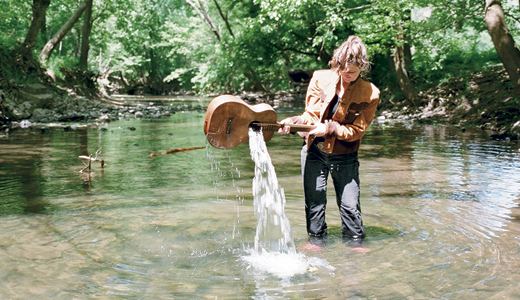 You’re probably unfamiliar with Maxxi Soundsystem unless you avidly follow British club culture. The stage name of Brightonian Sam Watts, Maxxi Soundsystem began to gain notoriety with his 2010 song “Criticize,” which was featured on BBC Radio 1 and became a club favorite overseas. With eight years of DJing experience under his belt, Maxxi Soundsystem is confident “he can rock any dance floor that’s put in front of him.” He is working on an EP of all-original material with New York record label Nervous, but until then, you can enjoy Z-bar’s new import live. This event is 21 and over. —Simon Isham

Westport Whiskey & Wine, eclectic emporium of libations and liquors, is upping the ante at this week’s Open Bottle Night, which will pull double duty as the opening of their latest exhibit featuring local artist Jennifer Horne. The multi-talented artist and her husband are longtime customers of WW&W, and co-owner Chris Zaborowski describes her as “enthusiastic and, in my opinion, quite talented.” Horne works in multiple media, from block and screen prints to watercolor and oil paint. In 2010, U of L selected one of her block prints for a special exhibit at the Hite Art Museum. This exhibit ranges from etchings to photography and includes several images captured during Horne’s travels around the world, as well as a new original piece entitled “Pastiche.” —Jennifer Harlan

At the original dedication of the Louisville Clock in December 1976, a crowd of nearly 3,000 converged on Fourth Street to witness its maiden race. The massive masterpiece, with its tilted track and caricatured contestants, soon became the whimsical symbol for Derby City, a joyful toy in the cradle of mid-Southern hospitality. It also conveys the charm of its creator, sculptor Barney Bright (1927-1997). After two relocations, the mechanically challenged clock was dismantled in 1993. Since then, a vigilant village led by dessert dynamo Adam Burckle has toiled to restore the iconic timepiece. Slow and steady won this race. Rejoice in the winner’s circle at Theater Square (near Fourth and Broadway) Friday. After Mayor Greg Fischer presides over a world-class rededication of the largest folk-art clock on the planet, Louisville’s own Caribou will classically rock, roll and rule. —Steve Shaw

New Englanders Shanti Curran and Buck Curran have first names as unique and free-spirited as the music they make. The married couple’s take on various folk styles — ambient, bluesy, British — is druggy in the holistic sense, more “Lord of the Rings” than Mumford & Sons (“British” here refers to the classic folk breakthroughs of Pentangle, The Incredible String Band, Fairport Convention, and so on). The natives of the other Portland, in Maine, came through here last year and are always worth seeing, but especially this time with opening act Mariee Sioux, whose collaborative EP with Bonnie “Prince” Billy, Bonnie & Mariee, was released this spring on Spiritual Pajamas Records. —Peter Berkowitz

It’s sad news that the Louisville Visual Art Association will be vacating its beloved Water Tower location in October. As a goodbye, it’s doing a modern version of “Art Envoy,” its first major show at the Water Tower. In a celebration of the past and the present, 18 artists from the original 1981 exhibition have been paired with 18 young contemporary artists. The free opening reception is Friday, from 6-10 p.m. If “Art Envoy” is the goodbye exhibition, then “ORANGE — Night of Art” is the farewell shindig. The gala is on Sept. 8 with visual and performing art, food and entertainment. Tickets are $175, with the proceeds benefiting LVAA’s Children’s Fine Art Classes and OPEN DOORS art education programs. “Art Envoy” will be on display during “ORANGE.” —Jo Anne Triplett

Brew at the Zoo

Brew at the Zoo is back again Saturday with the usual fun — tons of breweries and wineries from around the region, plenty of food samples, games, music and plenty more. In fact, this year, the event is being dubbed Brew at the Zoo & Wine Too, so be prepared for double the fun. Food from local restaurants and vendors will be available for sampling, beer and wine continues until 8:30 p.m. (or until they run out), and each attendee will get a souvenir Brew at the Zoo mug from which to enjoy these tasty beverages. Of course, there will also be water and other non-alcoholic beverages provided, so be smart when you sample. Also, 100% Poly will provide musical entertainment, serving up their kitschy brand of disco and funk. The event is a zoo fundraiser, so make plans to attend and do your part. One request: Please don’t get the ostriches drunk — they’re ornery when they’re imbibing. —Kevin Gibson

There are so many visual artists who are friends with musicians that it’s almost a cliché. August Northcut and Josiah Kamer decided to put on an art exhibition, and their music friends asked if they could come along, too. “This show was initially sparked on a whim,” says Northcut. “We simply felt inspired to put on a duo exhibition and create all new pieces for it. Once the guys from Sea Hero agreed to play (beginning at 9 p.m.), the title ‘Beards of Prey’ was thrown out as a joking suggestion. But after a little consideration, it became clear that it provided a perfect mood for the event. The artworks and the music have a lot to do with each other, and … serve as appropriate representations of this city’s arts scene.” —Jo Anne Triplett

You may notice that “Connect” commences at a bizarre time. This is because it kicks off two hours before sunset and ends two hours after sunset (at 10:22). The event is a celebration of creativity along the trail around Lake Nevin at Bernheim. Visitors will have the chance to interact with art and sound installations, participate in science experiments, and view performance art. It has been compared to a miniature version of Nevada’s legendary Burning Man festival in that it challenges guests to consider more deeply how they can live in more perfect harmony with nature. In keeping with this goal, “Connect” is completely deconstructed afterward so that the landscape is returned to its natural state. Musical guests include Catherine Irwin and Johnny Berry & the Outliers. Food and drink will be available from local restaurants and breweries. —Simon Isham

Shy Hunters are instant pop gratification without the fattening cheese. The duo, Sam Levin and Indigo Street, are no strangers to the studio (backing Yoko Ono, Jim White, Jolie Holland and more), but it was only recently that they dropped their first 7-inch. These two tracks provide the basis for Shy Hunters’ sound: dark corners often gone unnoticed. Street’s vocals remain beautiful without straining notes to extract the right emotion. Levin treads beside her with twinkles of somber riffs, culminating in dark, poignant pop ballads that sting like a windstorm of evaporated tears. Join Shy Hunters as they embark on tour. The heavy mood will surely lighten in a live setting. With R. Keenan Lawler and Mesiko. —Lara Kinne

Denny and the Jets

You can tell Nashville’s Denny and The Jets appreciate a throwback to the early days of rock ’n’ roll, and not just because of the ’74 Elton John hit that comes to mind when you hear their band name. With songs like “Fun Girls” and “Blow Whistle Blow” sounding like yesterday’s Bill Haley and the Comets combined with the swoon of today’s Deer Tick, their set (and their new album, Slick Rick) is guaranteed to make you tap your foot and swing your hips. Joined by local indie rockers Giving Up, whose first full length PEACE SIGN/FROWN FACE was just released on Independence Day, and with an evening-ending dance party provided by DJs Evan Patterson and Jonathan Wood of Old Baby, this is a night the hip cats of Louisville will not want to miss. —Kelly Kettering