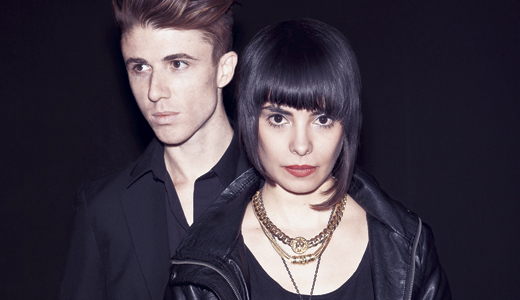 Some bands are defined by their image; some by scratchy vocals or a signature wall of sound. Others are known for simple melodies — the kind that stick around in the brain for hours on end. School of Seven Bells is more abstract. The number of musicians in the band is fluid. They’ll tour with four, then three, then five. Right now, they’re at four, but that could all change at a moment’s notice.

Alejandra Dehaza and Benjamin Curtis are the band’s core songwriting duo. But their three-album catalog has stretched from the ethereal, wispy musings of Alpinisms to the pulsing heat of songs like “Low Times,” from this year’s Ghostory. Over the course of a single album, you’re transported from the shoegazey to the super-synthy, and countless soundscapes beyond.

As Curtis explains, they’ve never really been a traditional rock ’n’ roll band. The one thing that brings continuity to School of Seven Bells is Dehaza’s emotional sensibility, and her lyrical approach: taking simple subjects like love and longing and transforming them into passionate experiences.

Their songwriting process is unique. Dehaza comes up with the lyrics, and Curtis responds by molding the music around them. His creations prompt her to alter the words, and they bounce back and forth like that until a song is complete.

It’s different every time. “The catalyst can be a line that Alley writes, or a sound that I make, or a melody, or anything. And the song just sort of explodes from that,” says Curtis.

Ghostory is written from the perspective of a character named Lafaye. Sometimes Lafaye is a malefactor, other times she’s the victim. It’s not Dehaza’s first time writing as a character; Seven Bells’ other albums are littered with songs from different voices. Deahaza explained that “My Cabal” was a story about an alpinist and a poet, both crippled by their impulses. Writing as characters, Dehaza can explore her own emotions.

Though the music can stretch into dreamy, wraithlike territory, Curtis insists their live show isn’t played behind laptops and machines. It comes to life, an immersive burst of emotions. And, he emphasizes, it’s loud.

Dehaza and Curtis are getting to the point where they can’t fit all the songs they want to play into their hour-and-a-half set. Even while they’re touring, new songs are coming out of the woodwork. So quickly, in fact, that they’re halfway through writing the next album.

“We can’t stop making music,” says Curtis. “It’s a good situation to be in.”

To share some of the wealth, they’re bringing a four-song mini-album with them on the road that fans can only get at the shows. The new material is their most direct yet, and for good reason.

“There’s an intensity to Alley’s writing, and some of the subject matter is really heavy. I think the idea this time was that we wanted your brain to be fully absorbed in the story and the words and where the vocals are.”