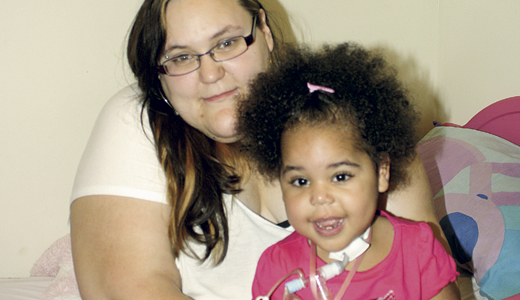 There’s no question a little girl lives in Madi Roarx’s room: pink bed, pink rug, a basket stocked with hair barrettes, and Dora the Explorer stickers parading around the walls. This morning, Paula Roarx, a friendly woman in her early 20s, watches her daughter snap open and close a pink toy cell phone, a playful grin hooked into the 2-year-old’s cheekbones.

Madi, who’s happy and talkative, seems oblivious to the tracheal tube attached at her throat and connected to a hissing, blinking machine.

“She had a hard start to life,” Roarx says.

At birth she was diagnosed with pulmonary hypertension and chronic lung disease. This requires oxygen 24 hours a day. Clean, cool air is crucial.

So Roarx panicked about a year ago when massive leaks from an upstairs apartment caused water to seep into her unit near Schnitzelburg. Roarx pulls up pictures on her computer that show water cascading from behind a light switch and through air vents. She feared mildew and mold in the rugs. She says Madi started coughing more. Her illness seemed to worsen.

During a visit to her doctor at the University of Louisville’s Child and Youth Project pediatric clinic, Roarx mentioned her predicament. She was referred to a relatively new program — Doctors and Lawyers for Kids. It’s a nonprofit medical-legal partnership offering free legal services to low-income families in an effort to remedy social, educational, economic and environmental issues that could harm a child’s health.

The program started last summer as a pilot at the Children’s and Youth Project, a large primary care teaching practice of U of L Pediatrics. The clinic serves more than 9,000 inner-city, low-income youth.

Roarx was an ideal candidate for their services (which do not include criminal cases, personal injury or medical malpractice). The family was living in an apartment owned by the Louisville Metro Housing Authority. Roarx had requested a transfer after the leaks began. But in December of last year, her request was denied. With a single call from the Doctors and Lawyers for Kids attorney, however, her transfer was approved the following month.

They moved in the spring. Madi’s health seems to have improved. As she talks to LEO, Roarx repeatedly expresses gratitude for the legal help.

Now even more families can take advantage of the program. In May, Doctors and Lawyers for Kids expanded their outreach into Kosair Children’s Hospital and two other urban U of L pediatric clinics. This means they could potentially serve around 25,000 children.

The medical-legal partnership model was developed at Boston Medical Center in 1993. Since then, more than 100 partnerships have popped up across the country, including Doctors and Lawyers for Kids in Louisville. It’s a concept endorsed by the American Bar Association and the American Academy of Pediatrics. After all, anyone in the health care field knows medical care alone can’t always solve health issues, especially among the poor. Often troubles arise from diet, environmental factors and financial stresses.

Traditionally, social workers or case managers might assume the role of problem solver.

But they’re generally not familiar with laws meant to protect the safety and health of the community. Some studies suggest low-income individuals have two to three unmet legal needs.

Dr. Becky Carothers, the medical director at U of L’s Children’s and Youth Project, admits that before the medical-legal partnership was launched, she would occasionally find herself stumped by families who presented stories of tax woes and housing or income injustices.

“I don’t know about legal anything,” Carothers laughs. “And most physicians don’t. So if our patients say something about these needs, we really don’t know how to help them.”

Since Doctors and Lawyers for Kids began, about 70 cases have been closed. Families at or below 200 percent of the poverty level (about $45,000 a year for a family of four) qualify for services.

Andrea Hunt is the project’s sole full-time lawyer at the Children’s and Youth clinic. She says half of the cases have involved housing problems. She’s also resolved a number of legal frustrations regarding children who qualify for exceptional child education (or special education) services but for some reason are not receiving them. Hunt says most of the cases take about a half-day to wrap up, just a few phone calls to landlords or school officials.

“A lot of times, people have an issue where they could use an advocate and get something resolved quickly before it turns into a legal crisis,” Hunt says. Once it reaches that crisis stage, matters get costly and “the stakes are higher and you can’t always guarantee a great result.”

Martha Hasselbacher, a retired general counsel at Norton Healthcare and past president of the Louisville Bar Association and Legal Aid Society, helped launch Doctors and Lawyers for Kids. She calls this approach preventative law. Just as doctors preach the importance of preventative medicine, this project aims to disrupt legal issues before they balloon.

“What we’re doing is training medical personnel to take a social-legal history so that they find these issues,” Hasselbacher says. “Sometimes people don’t know they need to walk into a lawyer’s office. So it’s also catching a lot of problems that would not have been recognized.”

For example, if a child has asthma, doctors are encouraged to ask about housing. ADHD? Ask about education.

Hunt recalls a father who, during a routine check-up, stated his apartment didn’t have heat. Because of that, the father admitted he’d stopped paying rent. Hunt saw this situation barreling toward eviction. She advised him that there’s no legal protection for not paying rent. So while she worked on having the furnace replaced, she instructed him to write the rent check. All was resolved within days — eviction averted.

With the program’s expansion, it’s expected Doctors and Lawyers for Kids will tackle around 500 cases a year. That’s a “conservative” estimate, says Hunt, who is assisted by a paralegal. The inflated workload won’t fall entirely on their shoulders. A roster of volunteer lawyers has been created to take cases. Those lawyers come from Legal Aid, the Louisville Bar Association’s Pro Bono Consortium, and law students from the University of Louisville Brandeis School of Law. Some of these lawyers might be recruited for difficult, time-consuming cases, like those dealing with immigration.

While it’s often perceived that lawyers and doctors make for a bitter blend, Hasselbacher says this project shows even occasional adversaries can unite with purpose.

“The most important thing is they are professions that by their nature have a duty to give back to the community,” Hasselbacher says. “And both physicians and attorneys have an explicit ethical duty to give services to those who can’t afford it. And that’s really brought together here.”