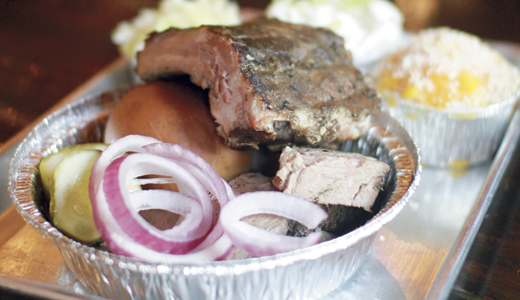 Why not invite a vegetarian friend to join you for barbecue today?

No, I’m not suggesting you torment your carniphobic buddies with plates of deliciously smoked and sauced animal flesh. Feast BBQ, newly arrived in the growing foodie scene that is downtown New Albany, offers a better option, more diverse and inclusive by half: You can get your smoky, saucy protein in the form of pulled pork, brisket, pulled chicken or … tofu!

What’s more, in the capable hands of Chef Ryan Rogers and his team, the barbecued tofu is good enough that even a devoted meat-eater might be tempted to take a taste. Dense, gently smoky, crispy on the outside, creamy on the inside, these planks of protein taste … well … like chicken. Delicious, barbecued chicken, but no animals were harmed in its production.

Of course, there’s plenty for carnivores, too. Mary and I went over the other night and pretty much ate our way through the menu, leaving happy, stuffed, and laden with a huge grocery bag full of leftover animal and soy protein.

Feast joined the crowded New Albany scene when it opened last month on Main Street. It’s an attractive new space built over the bones of an ancient watering hole, which opened in 1882 as Sunny Side Saloon and Restaurant. Around the turn of the previous century, proprietor Joseph A. Renn — perhaps anticipating the old Tangerine Restaurant’s noteworthy slogan, “Worst Food in Kentucky,” declared the property “The Finest Saloon in New Albany, and the Worst Whisky, Wines, Beer, Cigars, and Tobacco in the City,” adding, “Come Judge for Yourself!”

Feast’s folks appear to have a loftier standard, and in my judgment, they have achieved fine food and drink, although the cigars and tobacco, happily, are nowhere to be seen or smelled.

They’ve worked hard to restore the original charm of the two-story brick building’s ground floor, tearing out crumbling plaster to reveal exposed brick. The original floor joists were built into tables and a bar top, resulting in an old saloon feel.

Rogers, a 20-something with a lot of kitchen experience under his belt, graduated from New York’s French Culinary Institute and did time in the kitchens at the Oakroom, Zanzabar and Anchorage Café before moving on to head this venture.

Feast’s saloon side features an extensive bourbon list, a short selection of bourbon-based cocktails, and an appealing row of craft and local beer taps.

Dishes are served in foil takeout containers. We settled right in to a pair of salty, crunchy appetizers: The fried pickles ($6) were thin-sliced chips cloaked in a light, grease-free crust, dusted with crumbly Mexican cotija cheese and cilantro, and served with creamy ranch dressing. They beat the hell out of Genny’s original. Onion straws ($6) were just as addictive: thin curly strips of sweet onion lightly breaded and perfectly fried, tossed with sliced scallions and cotija, with sweet barbecue sauce for dipping.

The meats were juicy, flavorful and lightly smoked; ribs were tender but firm. The tofu items, as noted, made soybean curd taste good enough to tempt a carnivore. A tofu taco ($3.50) was presented taqueria style, crispy-smoky tofu planks atop a pair of corn tortillas, dressed with shredded cabbage, cotija, pickled red onions and cilantro. A slider ($5) featured four tofu planks stacked on an excellent burger bun. A squirt or two of hot, mild or vinegar sauce brought them home.

Sides of vinegar slaw, mac & cheese and collard greens with pork were all estimable, although a spicy cayenne heat in the collards came as a surprise. Advance warning would have been good.

Feast’s popular dessert choice, banana pudding ice cream and vanilla wafer ($7), was a chef’s arty version of the old country classic. A scoop of dense ice cream — or maybe frozen custard — and whipped cream and bananas was perched on a base that appeared to be a giant, house-made vanilla wafer. Calorific and good.

We spent … too much. With a fruit jar of Upland Wheat beer and a cola, our toll eventually lofted to about $50 before tip. Of course, this resulted in enough doggie bags for about four more meals. You could get away for half of that.