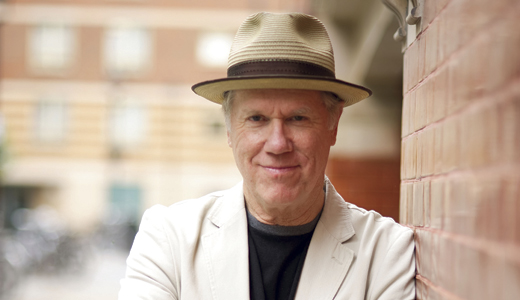 Singer/songwriter-actor-family man: Loudon Wainwright III defies categorization. His first album was released back in 1970, and his recordings over the years have ranged from the early novelty hit “Dead Skunk” to his acclaimed current release, Older Than My Old Man Now. On it, Wainwright pays tribute to his father (famed for his Life magazine writing), as well as addressing his own aging process, sometimes seriously (the title track), sometimes with tongue planted firmly in cheek (“I Remember Sex,” with Dame Edna Everage).

He’s also known for acting, including roles in several Judd Apatow productions. When he comes to Louisville, Wainwright will perform a free but sold-out concert at the library’s main branch before beginning work on Louisville filmmaker Archie Borders’ “Pleased to Meet Me.” The movie is based on an episode from “This American Life” entitled “Everyone Speaks Elton John …” Co-starring in the film are other musical heavyweights, including Aimee Mann, John Doe, Joe Henry, and members of Chocolate Genius, Over the Rhine, Whispertown, and Louisville’s The Slow Break.

Wainwright sounded relaxed as LEO caught up with him at his home.

LEO: After all these years of making music, how do you keep it fresh?

Loudon Wainwright III: I’m down to taking it day by day, and looking to the next project.

LEO: Older Than My Old Man Now maintains a focus on yourself and your family, not only in subject matter but in personnel and writing credits. How did that come about?

LW: I’ve been writing about the family for some time. (1992’s) History was focused on family. Looking at death and mortality is a trigger. People should know that there’s a lot of guests on it, including my four kids (Rufus Wainwright, Martha Wainwright, Lucie Wainwright Roche, and Lexie Kelly Wainwright), Ramblin’ Jack Elliott, Chris Smithers … My father’s a guest, insomuch as there are two samples of his writing that serve as introductions to a couple of the songs. “Over the Hill” I wrote in 1975 with my then-wife Kate McGarrigle, so she’s on the record, too. That’s an aspect of the record, all the brilliant people on it.

LEO: How did you get involved with the “Pleased to Meet Me” project?

LW: Joe Henry, the wonderful producer and songwriter and singer and guy — I believe his brother David lives in Louisville. I think I met him when I was down there at the library last time. Anyway, Joe got in touch with me and told me about the script and this project, and mentioned that there was a part in it that he and Dave thought I might be right for, so they sent me the script, and I read it and liked it. I emailed Archie and found out more about the project, who else was going to be in it, and it sounded like a fun thing to do, so I said “OK.” From time to time, I get acting work, but usually I have to audition to get a part. So, for someone to come up to me and say, “You want to be in our movie?,” it’s hard to say “no” when that happens.

LEO: Have you done any pre-production work yet?

LW: No, I haven’t. I’ve read the script a few times … I may grow a beard, there’s some work involved in that.

LEO: Do you try to present your performances differently in the library setting than if you were in a theater or other venue?

LW: Aside from making a couple of jokes about being in the library, I wouldn’t change much. I just stand up there and do these songs pretty much. I don’t really make any adjustments for the venue. I play in parking lots, churches, schools, auditoriums, little clubs, and big festivals. So, I might reference the fact that I’m in the library, but I don’t make a big deal about it.

LEO: Is there anything else you’d like to add about your upcoming trip to Louisville?

LW: I’m real excited about going to a Louisville Bats game. I did that before, when I worked on a film in Kentucky called “Elizabethtown” a few years ago, and went to a couple of Bats games then.