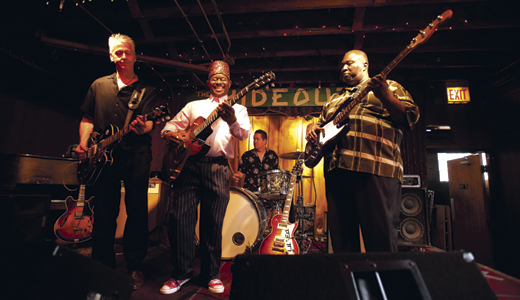 In 1986, professional car washer Lil’ Ed Williams, then 31, went into a recording studio with his band, the Blues Imperials, to cut a song for an Alligator Records compilation. The venerable Chicago blues label liked what they heard so much, they offered the band their own album.

Their eighth album for the label, Jump Start, is now out, full of boogies, shuffles and burners, mostly co-written by singer/slide guitarist Williams with his wife, Pam. The band has toured the world since they broke through, landing everywhere from Germany to Japan; Lil’ Ed’s even appeared on “Conan,” where he attempted to teach the TV host how to play the blues.

It’s not always glamorous on the road, of course. Our interview was conducted shortly before a visit to the dentist.

LEO: Have you been flossing properly?

Ed Williams: Yeah, well, I don’t have too many to floss these days! (laughs) I got bad cavities … you get on that road, and you eat that crazy food — hamburgers and candy bars — that’s all you can eat when you’re in the van. It ain’t like you can stop and pull over and grill.

LEO: One of the songs I wanted to ask you about was “No Fast Food.” (Note: The song asks, Why go out for hamburgers, when at home I eat prime steak?)

EW: (laughs) Oh yeah, I’ve been getting a lot of questions about that!

LEO: You know, I get the metaphor, about how you should be faithful to your woman; but it’s also timely, as so many people are worried now about their health and obesity.

EW: (laughs) Yeah, yeah! And that’s a good song for not eating a lot of fast food. All fast foods are fattening. I mean, you can go to Olive Garden and you can still find something that’s fattening in there, you know?

Actually, my wife wrote that song. She’s always talking to me about my belly. She says, “You know, you’ve got a pot-gut from eating all them burgers.” (laughs) And candy bars, like I said earlier. This is so weird — when you’re at home, you crave the good food. You know you can cook it, you can stew it if you wanna; we eat stuff like vegetables and little strips of chicken, and that all tastes real good. I use olive oil, something that ain’t fattening. But the minute you hit that road, man, it’s like McDonald’s and Burger King (laughs), you know?

LEO: How involved is your wife with the band?

EW: She’s pretty involved. When my wife and I first got married, she was actually singing a little bit. She’s real shy — ladies are like that. She sang, and she’d drop her head down a little bit, and finally she said, “Baby, I ain’t gonna do this, this is not for me.”

My next CD — and you’re the first one I’m telling this to — I’m actually gonna have her do backgrounds, like the old Elmore James and Jimmy Reed records. I think that would be really cool. I tried to talk her into it this time. Some of those songs she could’ve done backgrounds for me. But she was like, “Nooo, I ain’t goin’ there! I ain’t goin’ to no studio.”

But she’s really involved. I take her out to clubs, and I sing and inspire her. She’ll take a pen and pad out, and start writing something down. She’s always doing that. And she always amazes me.

The Blues Imperials also include Lil’ Ed’s half-brother, bassist James “Pookie” Young, drummer Kelly Littleton, and guitarist Mike Garrett. The band took a lengthy hiatus in the ’90s but has been going strong for the past decade, about as long as his marriage, says Williams. “We been together so long now, it’s not even about keeping the band together. We’re all family now. We love each other like brothers. And that’s a good thing, because they know me, they know what I like and dislike. And I know what they like and dislike. So, we try to keep the dislikes from coming into the likes. And that keeps the band rolling together.”