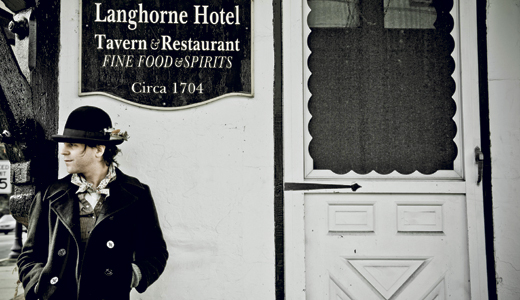 Hats off to Langhorne Slim. Or rather, hats on. The dude likes his headgear; maybe that’s why he fits in so well here. Every day is like Derby for the 31-year-old Pennsylvania native who took his stage name from a town in his home state. He wears hats on and off the stage, and after our conversation, he may have been convinced to find his next Derby hat when he passes through Louisville.

“For anybody who wears hats, not just any hat will do, you know? It’s really gotta speak to the man or woman — the perfect hat. It’s a lifelong search for the perfect hat,” Slim explains.

The secret to rocking that perfect hat is confidence, Slim says, and he knows a thing or two about having guts. Langhorne Slim left home in his teens to play open-mic nights in Brooklyn and has lived much of his life since on the road. In fact, he’s kind of homeless right now. Or, as he explains it, he’s a “wandering man.”

He got rid of his place in his most recent adopted city, Portland, Ore., and has been crashing with friends and family when he’s not on the road. After a five-year relationship with his girlfriend “and cats” ended, he’s been exploring the country.

Not that Slim is afraid to call somewhere home. On the day of our interview, he was back in Pennsylvania spending the day with his mom and grandma. He sounded positively gleeful describing their big plans to go eat and shop for a new tour trailer.

Slim’s love for his family is evident in his music. In a raspy voice, he croons about missing his mom, and in the touching “Song for Sid,” Slim reminisces about his grandfather, who passed away a year ago. The song has really struck a chord with fans. Slim says countless people have approached him to share their own stories of loss and grief.

“The one thing that is beautiful, but also sad in ways,” he says, “is that you open yourself up to hearing a lot of people’s struggles and pains when you’re singing about heartbreak and loss. People connect with it.”

Touring behind his fourth official full-length, The Way We Move, Slim is bringing his most live-sounding album to life. He and his bandmates, Malachi DeLorenzo (drums), Jeff Ratner (bass), and David Moore (keyboards/banjo), recorded the 14-song set live. Instead of overdubbing vocals after the band — known as “The Law” — performed their parts, they immersed themselves in the moment.

“I just felt more at ease, and I felt sort of rock ’n’ roll, rather than when I was sorta singing karaoke over what my band was playing in the past.”

The Way We Move is a near-perfect replica of Slim’s gritty live show, which swings between soul, gospel, folk and rock ’n’ roll. Nothing can do the real thing justice, though. The foot stomping, vicious raw energy and pulse of a Langhorne Slim show is the natural substitute for 10,000 Red Bulls. It’s as real as it gets — a true, honest rock band.

“I think people right now really want something that feels like it’s coming from the heart, and it’s ballsy and real,” Slim says. “There are a lot of people that are craving, for lack of a better word, authentic sound. I know I am. That’s what I’ve always loved.”