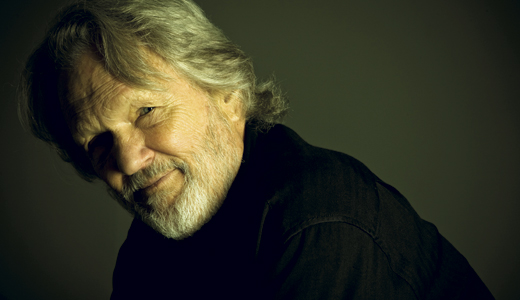 Kris Kristofferson has written many classic songs — “Me and Bobby McGee,” “Help Me Make It Through the Night,” “For the Good Times,” “Sunday Mornin’ Comin’ Down” — and has also been a movie star (“A Star is Born,” “Heaven’s Gate,” several Sam Peckinpah films and “Blade” titles), an Army captain, a helicopter pilot, and a janitor. The 76-year-old father of eight releases his next album later this year.

LEO: How’s your autobiography coming along?

Kris Kristofferson: Well, slow (laughs). My wife really wants me to get on it, but so far I’ve been managing to avoid that.

LEO: I’m sure there are lots of great stories you have to share.

KK: I just hope I’ve still got a memory by the time I start.

LEO: Are you worried about some stories that you’re less proud of, that reflect a younger man’s mistakes?

KK: No, no, there’s nothing really that I’m ashamed of. And I really doubt that I can make anybody mad about anything … but, I don’t know, I’m still out there workin’. I really don’t feel like writing about it yet.

LEO: You’ll be playing solo here for an hour or two.

KK: Yeah, I’ve been doing it that way for about 10 years now. There’s something about it that works; I don’t know what it is, but there’s nothing between you and the audience. Once you get past the fear of the first song, it’s a pretty good experience.

LEO: You still get nervous before each show?

KK: Oh, yeah! I think when I stop getting nervous, that’s when it’s time to stop and write that book (laughs). I’ve always been that way. It’s like the kick-off when you’re playing football. I get excited.

LEO: You’re very outspoken about politics and world events. How do you feel about where we’re at right now?

KK: Well, I’m hoping that we’re intelligent enough to give Obama another four years. I think positions all over the world are a little precarious now, economically. But I have confidence in Barack Obama.

LEO: Has he let you down at all, or do you think he’s been given a hard shake by some people?

KK: I think he’s got a hard shake just because conditions worldwide are tough. Everybody’s hurting economically, and I think we’re doing well to do as well as we are. I would like to see him get another four years and do more in the line of human rights and certain things that he stands for that he’s been behind the eight-ball on, such as economic hardship. But I feel he’s definitely the best choice.

LEO: I’m about half your age now, so I was wondering if you could share just one insight you’ve learned through the years, what would you tell me?

KK: I think you should do what you love to do. Follow your heart, you know? The best thing I ever did was to make my own direction — when I decided I was going to be a songwriter, it sounded like I was going to be a circus clown (laughs) to my parents and a lot of people, my peers academically. They didn’t think a Rhodes Scholar should do that, go to Nashville. Country music had a bad reputation. But I’d been a country fan since way before — I was a Hank Williams fan. Once Hank Williams was there, I was hooked. I’ve never regretted it.

It took me about four or five years to get to where I didn’t have to work for a living. After I got out of the Army, I was a couple years flying down in the Gulf of Mexico; for a couple years, working as a janitor at a recording studio — but I never felt like I was failing, because I loved it so much. When I was working as a janitor at Columbia Records, I got to be in on sessions that no other songwriter could be at. Like the Bob Dylan sessions (for Blonde On Blonde), Johnny Cash — and I ended up being friends with those people. It’s been a pretty blessed life.