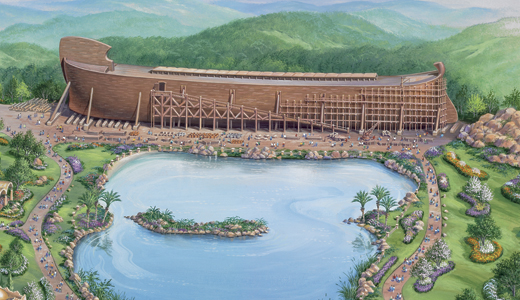 After Daniel Phelps — president of the Kentucky Paleontology Society — stops to admire a display of meteorites, a polite 13-year-old volunteer guide inside the Creation Museum shares that King Arthur’s sword was made out of a meteorite, which he called “sky iron.”

As we turn to walk past the “Dragon Hall Bookstore” — featuring a new T-shirt proclaiming God created fire-breathing dragons on the sixth day, and a mural depicting the legend of St. George slaying a dragon — my follow-up question cannot be suppressed.

“Did Arthur kill any dragons with that sword?”

“I’m not sure if he did,” he replies, “but Beowulf killed three dragons.”

The boy describes the final dragon as being able to fly and breathe fire, saying it “was probably a Pterosaur,” the flying reptile that went extinct about 65 million years before “Beowulf” was written.

When asked if those are just fictional stories, the boy says they’re real, as tales of dragons are actually documented history of humans’ interactions with dinosaurs.

Children believing such fantasies as scientific and historical fact is the mission of the man Phelps and I are here to see speak: Ken Ham, CEO of Answers in Genesis ministry. Ham’s “museum” and merchandise empire view dinosaurs as “missionary lizards” that will help entice young people to overcome the influence of a secular and Godless culture, pulling them back to a belief that every word of the Bible is true, the Earth is 6,000 years old, and the scientific consensus of Earth’s history over billions of years is the world’s most elaborate conspiracy of fraud.

Those kid-friendly lizards also make him a lot of money.

Today, Ham will give a sneak preview and update on his newest evangelical project, Ark Encounter — the Grant County park featuring a “life-sized” re-creation of Noah’s Ark, depicting the true story of a 600-year-old man wrangling two of every mammal, bird, insect and dinosaur onto a boat a few thousand years ago during a global flood sent by God.

While Ark Encounter has grabbed headlines nationwide since its announcement in December 2010 — along with a full-throated endorsement by Gov. Steve Beshear and approval for up to $43 million in potential tax breaks — the project has since been mired with delays and fundraising problems, including an announcement that the project must be completed in phases over 10 years, rather than all at once in advance of its scheduled opening in spring of 2014.

Though Ham and his colleagues spend much of the day unveiling more features at Ark Encounter, that excitement is tempered by a fundraising update that reveals groundbreaking for the park — which was supposed to begin last spring — could still be years away as the project is a hefty $44 million from its goal.

Following a loop of videos promoting his merchandise — including a book warning parents that their kids are in danger of abandoning the church for a life of abortions, coke-snorting and suicide — Ken Ham presents Ark Encounter as a way to counter society’s villains (scientists, the Supreme Court, President Obama) who undermine the Bible and America’s Christian foundation.

The ultimate goals of the park are to prove that Noah’s Ark could be built (with the animals fed and cared for) and to convert non-believers into “true Christians” — as well as make a fortune from millions of tourists from around the world.

Ham also claims that PBS will air the first of a three-part documentary about the making of Ark Encounter this fall, further promoting the park and enabling it to get up to 2 million visitors in its first year — attendance that would rival King’s Island in Cincinnati, despite the park having only one ride (planned for its ninth year), a slow-moving track celebrating “the 10 plagues of Egypt.”

Patrick Marsh, Ark Encounter’s director of design, previews each of the proposed exhibits for the first phase of the project, which would mostly be inside the three floors of the 500-foot landlocked boat.

Throughout the boat — featuring a restaurant on top, as well as bathrooms and elevators — visitors will see Noah’s family feeding and caring for the animals. Graphics in an accompanying packet show a dinosaur in one of the cages, despite the fact that when Ark Encounter officials were applying for state tax incentives, they hinted that they might leave dinosaurs off the ark.

The final room for visitors inside the boat is the “Christ the Door” Theater, where a film compares the safety inside the Ark to the eternal safety of accepting Jesus Christ as your savior. Marsh makes it clear that they expect “non-believers” to do just that before leaving the boat.

Outside the ark, Marsh details the proposed “parade of animals,” in which Noah leads dancers and musicians dressed as animals “in a spectacular choreographed hybrid of ‘world dance’ and music to create the unique flavor and experience of a pre-Flood culture,” all while being heckled by actors playing Pagans who doubt Noah.

The floor is then turned over to Joe Boone, the project’s director of advancement in charge of soliciting private investors. While Boone paints a positive picture in terms of future attendance and profits for the park once it opens, he reveals that fundraising difficulties could push opening back to 2016.

The first phase of the project will cost $73 million to build, and $6 million has already been spent on land acquisition and design. So far, Answers in Genesis has raised $7.5 million, with private investors pitching in an additional $15.5 million to the LLC, leaving $22 million left to raise before they have enough money to break ground, and $44 million left to complete the project. Boone estimates it will take 12-24 months to secure the funding to break ground, then it will take another 24 months to complete construction.

The company will then have to raise $53 million for additional phases of the park throughout next decade.

Such a delay in construction makes the potential for a full $43 million in tax incentives impossible, as the state will only rebate sales taxes for 25 percent of what they’ve spent constructing the project by May 2014. This in turn could hurt private investment for the park, as there is no longer the virtual guarantee of $4 million in rebates every year.

Boone directs interested accredited investors in the crowd to get more information following the presentation at a table outside the auditorium, as well as those willing to sponsor individual exhibits, most of which cost more than $100,000.

A DVD provided in conjunction with Boone’s presentation suggests Ark Encounter would have 1.2 million visitors and $42.4 million in revenue in its first year, with those numbers steadily increasing.

For an investor buying the $100,000 minimum unit of ownership, Boone projects a 20.6 percent financial return for investors, who would keep 60 percent of their yearly cash disbursements, with the other 40 percent being kept for future capital improvements for the park.

Crosswater Canyon Inc. — a subsidiary of Answers in Genesis — would maintain at least a 20 percent ownership of the company and have total control over operation of the park.

But this optimistic rate of return assumes both healthy sales tax rebates and astronomical attendance. A packet for investors reveals the numbers provided by their feasibility study are only estimates and gives fair warning the project has the potential to flop, with investors losing money.

During a Grant County town hall meeting Last August, however, Ark Encounter officials presented a much prettier picture. At the meeting, which LEO attended, Mike Zovath — Answers in Genesis co-founder and vice president, as well as executive director of Crosswater Canyon — told residents that fundraising was almost complete, groundbreaking could begin in two months, and that local residents could expect a $590 million economic impact for Grant County in the year following its spring 2014 opening.

“God’s raised up investors,” Zovath told the eager and receptive crowd. “We have 75 percent of our funding committed right now. That’s over $100 million. And very little left to raise in order to break escrow and start construction on this project.

“And everybody, there’s going to be an economic boom here.”

While the state has already allocated $2 million for infrastructure improvements off the Interstate 75 exit in Grant County to accommodate millions of visitors — with the potential for $9 million more in road construction on the way — that boom still remains very much in doubt.