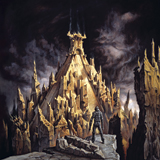 Xibalba is a Mayan word that roughly translates to “place of fear,” a realm of death equivalent with hell. With a band name that badass, it evokes a near mythological darkness, epic in its life-ending scope. They come heavily influenced by the tortoise-like pace of doom metal, but replace Black Sabbath riffs with death metal and hardcore. Hasta la Muerte is a stitched-together bastard of the heaviest forms of music, a genre-mingling orgy that conceives a vulgar atmosphere of desolation. The abyss-like churning permeates throughout, save for the re-recorded “Cold,” a live staple that moves with more urgency. A nod to Neurosis pops up on the instrumental “The Flood,” utilizing their tribal drumming tendencies to render a flowing reprieve into near beauty. The lava-thick grooves contained herein are a menace to society, crushing ears and exploding minds.