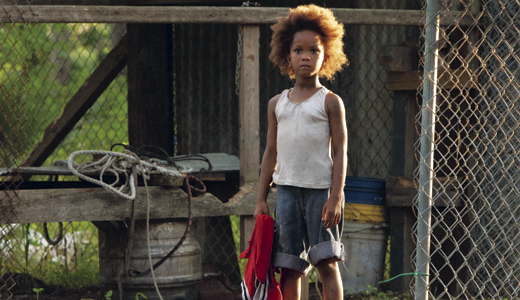 Imagine a children’s drawing set in motion and you’ll get a sense of what’s to come in “Beasts of the Southern Wild,” a fantastical new feature from first-time director Benh Zeitlin. This swampy Southern Gothic is shown from the point of view of Hushpuppy (Quvenzhané Wallis), a 6-year-old girl who’s left to figure things out for herself in a cut-off, storm-ravaged Bayou community called The Bathtub.

Although the setting wafts of post-Katrina Louisiana, there is something wonderfully make-believe about this world where die-hard residents sail around in detached pick-up-truck beds, massive, prehistoric warthogs called Aurochs are resurrected, and a precious pipsqueak interprets the chatter of The Bathtub’s teeming wildlife.

“Beasts” captures the poetic cadence of childhood, achieving an almost lyrical quality. “When an animal gets sick here, they plug it into the wall,” says Hushpuppy of the hospitalized, mainland residents on the dry side of the levee. This PG-13 tale may not be appropriate for some young viewers — for language, brief sensuality and child imperilment, says the MPAA — but it often evokes the stories of Maurice Sendak, or even a twisted, darker Dr. Seuss.

The production design, which ranges from shiny and whimsical to smudgy and ramshackle, can bring to mind the work of visual artists like Jean-Michel Basquiat and Kara Walker. The held-together-with-spit look of The Bathtub (Alex DiGerlando is the production designer, Dawn Masi the art director) and the cinematography (by Ben Richardson) is a big part of what keeps this dream afloat.

Richardson’s photography uses blown-out exposures, blurred focus and twinkly light sources — sparklers, fireworks, Christmas lights, etc. — to capture the magic realism of Hushpuppy’s journey. In one wistful flashback where the child recounts her estranged mother’s cooking, we watch glinting speckles of fryer oil as they pop from the ’gator in Mom’s skillet and move through the air like pixie dust. The effect is more than mere dressing, but a recall of Hushpuppy’s key belief that every little particle in the universe is connected to the whole. It also points the audience toward an important emotional cue that pays off in a climactic scene between the child and her ailing father, Wink (Dwight Henry), who is at once the biggest threat and only lifeline for his daughter.

For all its visual artistry, it’s the performances of the film’s two leads that will have me recalling “Beasts of the Southern Wild” years from now. Yes, it is that strong a film, an accomplishment made more impressive when considering its $1.3 million budget and all the first-timers who worked on it — like Dwight Henry, who, before his role as Hushpuppy’s well-meaning but unhinged father, was a baker at The Buttermilk Drop Bakery in New Orleans.

Then there is Wallis, still only 8 years old. It is not too much of a stretch to say she has achieved the impossible. Wallis was one of 3,500 who auditioned, and you’ll be hard pressed to imagine anyone else in the role, as so much of Hushpuppy is defined by the young actress’ banshee-like screams, defiant glances and other non-verbal behavior. Almost like the characters they play in the film, one wonders how much these two inexperienced actors leaned on one another and what they may have gleaned while wading through the frightening world of “Beasts.”