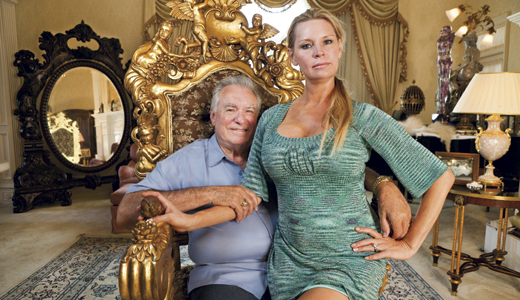 When documentary filmmaker Lauren Greenfield began shooting “The Queen of Versailles,” she couldn’t have known it would turn into cinema gold. Her initial focus was to shine the spotlight on millionaires David and Jackie Siegel as they were building their 90,000-square-foot dream house, which was to be the largest in America, and examine the eccentric personalities of the real estate businessman and his trophy wife. But what Greenfield ended up capturing was the downfall of the Siegel empire and life as they knew it when the stock market and economy tanked in 2011. It’s sort of a rags-to-riches-to-rags story where the viewer is front and center, watching the couple’s castle — and dignity — crumble to the ground.

The film opens with the opulent life of the Siegels. Jackie, 43, busies herself with hosting parties and benefits, picking out furniture and antiques for their new house, and checking in on her eight children from time to time. David, 74, spends most of his days at his office as CEO of Westgate, the largest time-share company in the world. Through candid interviews, we learn about Jackie’s early life as a small-town New York girl who dreamed of bigger and brighter things — which brought her to Florida and a life of beauty pageants and eventually meeting David after an unsuccessful marriage.

She may seem like your typical housewife of Orange County, with her full lips, long, blonde hair, massive chest and skinny waist, but Jackie has an outspoken innocence about her that is endearing throughout — even when her riches start to fade. “There is 30 years between us,” Jackie says of David, “but he doesn’t need Viagra. But at least there is that option if he does, in like 10 years or so.”

Meanwhile, David is your typical old rich mogul who thinks he has the world by the balls. He brags about who he knows, how big his house is going to be, and how tall his Westgate tower and casino is going to be in Las Vegas. His answer to why he’s building the largest house in America is: “Because I could.” He also coyly talks about his involvement with the 2000 election of George W. Bush, saying he’s personally responsible for Bush winning the presidency. And asked how — “I’d rather not say, because it may not have been legal,” he says.

It’s that kind of smugness that causes a dilemma for the viewer when the rug is swept out from under his time-share business. On one hand, you like to see a smug person get a reality check. But on the other hand, you worry about Jackie’s little perfect-world bubble getting burst. “I wouldn’t have had this many kids if I couldn’t have nannies,” she says, frustrated by the fact that they’ve had to downsize their help staff to a handful. And worried about what the future holds for her children, she says, “I told them they might have to go to college now. They might have to actually make their own money.”

“The Queen of Versailles” is a fascinating and entertaining look at wealth in America — what it does to people when they have it and when they don’t.