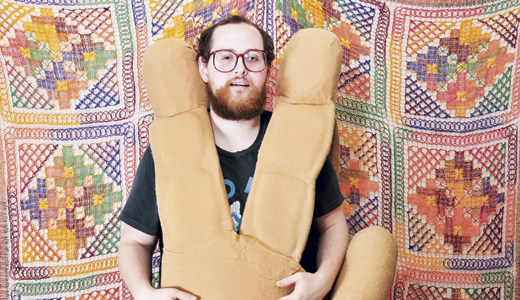 Dan Deacon is having a moment. The Baltimore-based composer/provocateur is unveiling a few connected projects this fall that have already raised the profile of the unlikely beat-making star.

His new album, a conceptual piece titled America, was released this week, arriving under an avalanche of hype from NPR, Rolling Stone, Pitchfork, et al., proclaiming it a “must-hear.” He’s co-directed his first video, for the single “True Thrush,” which has also been passed around online, and yesterday — his birthday — Deacon unveiled a free app meant to change the way concertgoers experience live performances. If it works.

A fan of site-specific performances, Deacon’s live show here, presented by the Kentucky Museum of Art and Craft, is scheduled to take place outside the museum. Deacon’s goal is to make every concert unique, and his free app allows him to synchronize all the smartphones in the room, utilizing them as both light and sound sources. He says it should work without using any wi-fi or data from the phones. “It creates a really unique sound environment and light environment that doesn’t really currently exist. We’re encouraging everyone who’s going to the shows to download the app, because we use it in the show.”

Sounds can shift based on how attendees hold their phones. “There’s going to be times when the only sound in the room is coming out of everyone in the audience’s phones.” Phones will also shift colors. Then again, it might not work at all. He’s only been using it since last week.

Deacon is an activist at heart, and his America is not quite the same as Lee Greenwood’s. While parts of his new album sound poppier and more accessible than some of his earlier work, Deacon continues to employ dissonance and thrives on challenging his audience. The second half of the album is a four-part suite taking up 22 minutes.

“When I started, I didn’t think of my music as inaccessible at all,” he says now, almost a decade later. “I came from writing for, like, five bassoons making squeak noises. But then when I started playing shows, I was, like, ‘Oh, this is weird to people!’”

Deacon feels stuck between different worlds at times. Indie rock fans see him as a DJ, while dance clubgoers think he’s a rocker. When he performs avant-garde work in New York, he is received as a serious composer — but when he goes back to warehouse parties, they write him off as being too pop. In Hollywood, he’s now being seen as a film composer, having scored Francis Ford Coppola’s “Twixt.”

“I like that spot. I’m comfortable being the weird nerd loser who was also the prom king and vice president of the student body. Not fitting into a niche, but not disenfranchising at the same time.”

Deacon’s been given opportunities that he never expected, like the film score, and commissions for orchestras and experimental music festivals, and sees how the work has led to what he’s accomplished with America. “All that really changed the way I felt about my music. It changed the way I wrote music, because I was writing for different contexts and different people. I was writing for humans — and that’s very different.

“I know how to communicate exactly what I mean to the computer, with the software I’m used to,” he continues. “But even though I went to school, notation is a language; if you don’t use it, it starts to fade … If I’m trying to convey a complex musical idea, I know where to put the rhythm down, where the pitch is, but in the articulation and the nuance, I was so utterly rusty. Working in those other environments brought nuance back into my mindset.”

Right now, Deacon is at the beginning of a tour meant to get his ideas out to as large a crowd as possible. He thinks it just might be working.

“I’m into it!,” he says, laughing. “But I don’t want to overanalyze it. I don’t want to change the way I interpret reality. People seem to like the record, and that makes me … happy.”