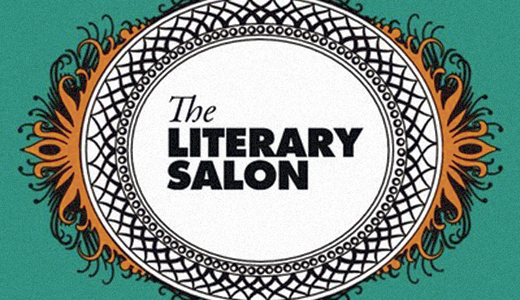 The official name of the “Literary Salon” is “The Shoreditch House Literary Salon.” But the connotations of the word Shoreditch (the etymology of which is too complex to go into here) were bound to be so off-putting to listeners outside London that the podcast has been shortened to, simply, “The Literary Salon.” Suffice it to say that Shoreditch is a neighborhood, and Damian Barr is its presiding princeling.

How to describe Damian Barr and what he does? Imagine if Stephen Fry were younger, thinner, sexier and Scottish. In fact, maybe Stephen Fry even has such a nephew.

I first came across Barr in Granta. He wrote a piece in connection with an issue devoted to the F word. He began like this: “I was the only man in my women’s studies class — isolated in a one-man gamete ghetto, avoided by my so-called sisters. Treated like a peeping tom in the changing rooms at a convent school … I was the oppressive Adam to their emancipated Eve. It was not cool.”

He went on to say that of the 542 books crowding his flat, 350 were by women, then went on to claim, “I am a feminist reader; I identify more with women than men. Like most women, I also sleep with men. This, I believe, gives me a useful insight.”

Indeed it does. Why did I never have students like this when I taught women’s studies? His writing, however smart and funny it is, does not get close to conveying his true gift for dialogue, or for setting up polylogue.

Not so very long ago, much of literary England considered any book-talk not happening through official channels (ahem, the BBC) to be downright gauche. But England’s neighbors to the north have always had the gift of gab, have long been more democratic about sharing the literary love, and, most winningly, know how to combine it with a good, stiff drink.

So salons and pubs and clubs have finally popped up all over London. While some are closed to nonmembers and far too many others are wankathons in the extreme, Barr’s salon is open — in person — to anyone who joins the SHLS Facebook page, is completely free, and even hands out free cocktails. Motto: “Not since the Marquis de Sade has reading been this sexy.”

For those not in London (meaning those tuning in by downloading), the motto at the iTunes page for “The Literary Salon” is, “Don’t worry. It’s not a book club — there’s no homework.”

But in truth, it’s about a hundred times more fun than most book clubs precisely because everyone at Shoreditch (most especially Barr) has done her/his homework. There are a few regulars in the audience. At almost every reading, the listener can hear Barr call first on a woman named Sylvia. He might say, “Yes. Sylvia, of course.” Or, “Up pops Syliva’s hand, like a toaster.” Barr is not shy about getting bossy with his audience either. It’s more than a little satisfying to hear him say, “Turn that phone off this instant.” Or, “Ooh, feeling a little judgy, aren’t we?” Or, “Someone’s had a cocktail too many. Outside you go.”

Standout guests include David Mitchell, Jon McGregor, Howard Jacobson, Janice Galloway, and John Waters. As of this week, there are 30 episodes available; a new season will start in September.

If you remain unconvinced, go right now to iTunes (for free, people!) and listen to podcast No. 15, with the writer Patrick Gale. Not only will you want to dash to the library and get all of his books, you will snort your earbuds out of your ears when Gale and Barr have a gay-off about hot farmers in Cornwall. In addition to everything else, Damian Barr has the world’s best laugh.