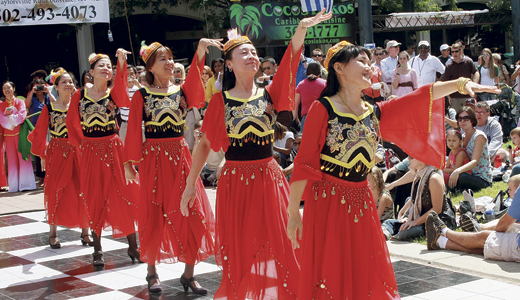 “We are a global city. We celebrate our differences, and that’s what makes us a unique city,” says Mayor Greg Fischer. It’s time again for what might be his favorite annual event, World Fest, a celebration of multiculturalism meant to welcome newcomers into Louisville’s socio-economic fabric.

For a music-loving mayor, it’s a good excuse to look official and shake hands with the people while gettin’ funky to some spicy salsa, Bollywood beats and raucous reggae. Veteran booker Ken Clay has assembled dozens of acts from here to Asia and back again, in addition to offering up food, art, education and civic programs.

LEO: What do you think is the most important aspect of the entire weekend?
Greg Fischer: I think the message I want people to realize is, “Wow! We are an international city.” We’re increasingly international, global, so they visually see it, they smell it, they taste it, they hear it at World Fest. Hopefully, what it is is an outlook. We should be one of the great international cities in the country, and World Fest brings it all together — for those who are in the middle of it, or those who are just discovering it for the first time.

LEO: What can you do to interest people who might not otherwise think it sounds like fun for them?
GF: That’s where I think music comes into play. It’s interesting — when I go to some of the stages (in recent years), you’ll see some people you see around at different music events who are really plugged in and know what’s going on. They say it’s outstanding, they feel like they’ve discovered something. So, to get that message out to the broader group of musicphiles in the city, so they understand what’s happening — they might think, “Oh, that’s just a festival on the Belvedere,” as opposed to a great, free, three-day music festival.

I think, as we get that out there, they see the food and everything else that’s going on, they’ll reflect on the globalized city we’re becoming and how important it is for us to be competitive in the world. If you’re not a global city, you’re not going to be relevant much longer.

LEO: There’s probably some people who, with the economy still struggling, are concerned about competing for jobs. What do you say to them?
GF: There’s a higher rate of entrepreneurship with internationals and immigrants. They create jobs, and they help grow the economy and make it bigger; they provide customers, as well. People who are best prepared are gonna win. So, I wouldn’t have a scarcity mentality looking at it that way. It’s making the pot bigger, and, certainly, growing our international community does that.

LEO: What’s your favorite part of the weekend — the music, the food, the people?
GF: Yeah, the people. You see the wonderment in people’s eyes, whether it be multi-generational Louisvillians who are proud to see their city internationalizing, or it’s that first generation or immigrant that’s appreciative and excited to be recognized and acknowledged as American citizens and Louisvillians, and are proud to be part of the team. You get it on both sides and put that together, and it’s a magic atmosphere for the festival. It’s a lot of fun, people are proud to be there.