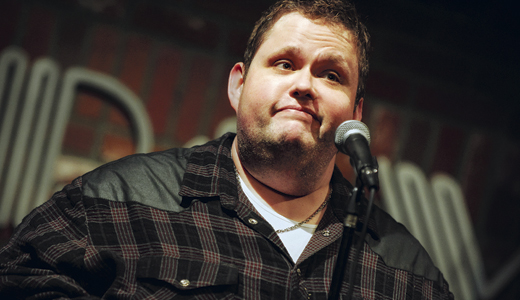 Not only is Ralphie May one of the hardest-working road comics, he’s also a Louisville favorite, packing every show when he comes through town. His latest Comedy Central special, “Too Big To Ignore,” is now available on DVD. May took time to talk with us for a few minutes.

LEO: We’re really excited about the show.
Ralphie May: You’re excited? Louisville is one of my favorite places.

LEO: Yeah, you seem to come through here a lot.
RM: Last year I was there twice — and I found Lynn’s Paradise Café. Oh … oh, my god. Get in my fuckin’ mouth — that place is amazing.

LEO: You’ve talked about how Richard Pryor and George Carlin were big influences on you.
RM: Man, they changed comedy. They were so smart, so ballsy — they put their ass on the line. It could’ve been bad, but they were tremendous. They changed modern stand-up comedy, and they did it courageously.

LEO: You opened for Sam Kinison when you were 17; that must’ve been interesting.
RM: Yeah … I shouldn’t have been there. He invited me to his after-party, and his after-parties were no place for a 17-year-old kid. I’m 40, and it’s probably no place for me now. Amazing debauchery there, it was incredible. He had rails of blow, tons of booze — he comes out of the bedroom and yells at me: “Kid, order some pizza!” That’s how much of a degenerate cokehead he was, he could eat and do coke at the same time. Impressive. So I call Shakey’s Pizza and they bring it over. Sam tips the guy with three little baggies of cocaine — and 30 minutes later we get a call back to the room from the pizza place, and they’re like, “Hey, do you guys need more pizza?” It’s a little bit sick, but it’s funny.

LEO: As a comic, it’s your job to make people laugh. What makes you laugh?
RM: You know what I really like to do? Watch “America’s Funniest Home Videos” — I like hearing the “witty” banter. I mean, good comedians make me laugh, but bad TV does, too. As comedians, we think differently. If a guy falls off a bridge, you think: What a tragedy. I think: Depending on where he landed, it could be hilarious.

LEO: When you’re preparing new material, do you just go to open-mics or are you beyond that?
RM: No, you’re never beyond any microphone. Like, tonight I’m going to The Comedy Store just to gauge some material.

LEO: What’s the worst gig you’ve ever had?
RM: I did a show at a Holiday Inn, in their bar, and it broke out into a riot. I turned into Mick Jagger at Altamont. Thirteen officers, 11 cop cars, two dogs, and a film crew from the show “Cops” all show up. I got arrested. They’re bringing me out, and I yell at the camera crew, “You gotta pay me! I’m leavin’!”

LEO: Wanna talk about your getting arrested in Guam for coming through customs with weed?
RM: I didn’t know I had it on me. I walked passed an amnesty box, passed a bathroom, and then walked 20 feet out of my way to go pet a drug dog. I love dogs, what do you wanna do? Then I called another dog over and pet him, too. They both sat down. I didn’t know that when they sit down it’s their way of saying, “Hey, I found drugs.” I just thought these dogs got it; they know I’m a dog person. It was pretty funny, actually.