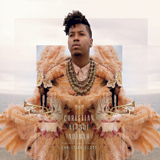 A recent remark about the ability musicians have to incorporate political statements into instrumentals led my younger, rap-focused friend to respond with incredulity. A week of experimentation followed, including Wagner, Copland, Coltrane’s “Alabama,” and this, the latest from trumpeter Christian Scott. As I know Scott to be one of the more outspoken composers today — which may motivate my ears to find the Message Songs — I imposed on others (folks who by now are used to me shoving CDs, flash drives and headphones into palms not outstretched). A decidedly non-scientific poll, it often resulted in sets of astonished ears. Christian Atunde Adjuah is a double album leaning more toward the sleek sonics of his first albums, and over the course of 23 songs maintains its fire throughout. This is an instant and permanent placeholder in the year’s Top 10.