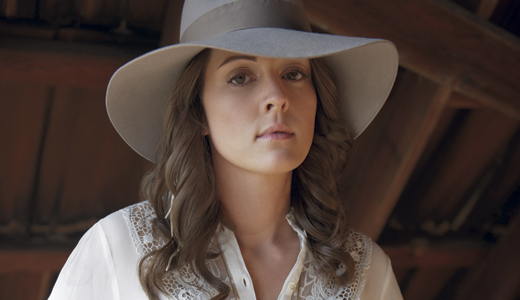 Singer-songwriter Brandi Carlile released Bear Creek in June and is on tour supporting the album that’s been described as “earthy” and “country-leaning,” but features enough Carlile staples — that golden voice, smart songwriting, and longtime band mates Tim and Phil Hanseroth — that it satisfies her devoted fanbase. She’ll be at the Iroquois Amphitheater as part of WFPK’s Rock ’n’ Stroll Saturday. LEO caught up with her by phone.

LEO: We’re looking forward to having you back. Are you ready for the humidity?
Brandi Carlile: You know what, yeah, I can handle it! I’ve been at some pretty crazy outdoor gigs on this tour. In fact, we played a show in Richmond, Va., that was so hot, fans were calling the venue and asking if the show was canceled.

LEO: Bear Creek sounds a bit more stripped down and raw compared to your previous albums — was that intentional?
BC: I would say not much on this album was intentional. It wasn’t a very thought-out or labored-over record. And I mean that in the best possible way — there’s an element of really reckless fun and innocence on this album that makes it what it is.

LEO: In the song “Keep Your Heart Young,” you talk about holding on to that inner child. What do you do to stay young?
BC: You can always tell when you got a big kid on your hands — everything about my home is like a tree fort. I enjoy being around children. I love to go fishing, catch frogs. I mean, I’m a musician, I don’t even have a grown-up job.

LEO: Favorite room in your house?
BC: Does it have to be in my house, or can it be out in my yard? I have a pond, and I love to go out in this little wooden rowboat that my fiancé got me for my birthday. I love sitting in my little 5-foot rowboat in the pond.

LEO: Congrats on your recent engagement (to Catherine Shepherd). Does she join you on tour?
BC: Yeah! She’s a trooper. She rides on the tour bus with me. It’s pretty amazing — she’s having a real good time with it.

LEO: What’s your writing process like?
BC: It’s so random — it’s something that happens to me. It’s not really something I sit down to do. I’ve heard a lot of different philosophies about the craft of writing and how to hone it. I find that when I’m not doing it, I don’t even know if I can. Things come to me when I just really need to say something.

LEO: What’s your favorite part of releasing a new album?
BC: Phoners! Just kidding. It’s doing that big first tour where you hear those lyrics come back to you from the audience. Just going, “Wow, this thing really made it out of my head and to the people.”

LEO: What’s your least favorite part?
BC: Probably industry expectations that always force their way awkwardly into art. I don’t like to know about sales or that kind of stuff at all. That’s a bummer to me. It’s kind of like revealing the man behind the curtain.

LEO: Who are you listening to now?
BC: Right now I’m really into the band The Lumineers. They’re awesome! We did some dates together and I got to know their music. Really love the band the Alabama Shakes — the singer Brittany (Howard) is loud and proud, and I really love that. And I love the Civil Wars.

LEO: What kinds of things would I be surprised to see on your rider?
BC: It’s pretty boring. It’s probably the most boring rider out there right now. Almond M&M’s is like my one thing — and they can be any color (laughs).