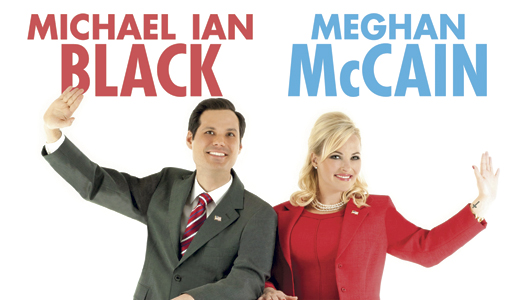 This experiment pitches like a ’90s Miramax movie: True Blue Northeast Corridor lefty, comedian and pop-culture pundit Michael Ian Black goes on a road trip across America with a political heir, the young but oh-so-red daughter of former presidential candidate John McCain, Meghan, to see how “real Americans” (however that moving goalpost is defined at the moment) feel about the country today. And to see if red and blue make purple, or if the married Black and single McCain would create a Ron Reagan Jr. or a Roger Clinton while on the road.

Unfortunately, “America, You Sexy Bitch” breaks no new ground and, while often amusing, shows the two as a microcosm of our flawed union and dysfunctional modernity. Sure, I lean more in Black’s direction than in McCain’s, but she has spent a few years pointing out the idea that she’s not, ahem, your father’s Republican. Reading through the book, however, it’s easy to see the only way she differs from her party is on gay rights. The rest of the time, she’s parroting much of the same sloganeering her party’s network pumps out, down to the simple and time-tested Clinton blowjob jokes and “Reagan Is God” tripe. It sullies her projected image of Conservative 2.0, when she’s really just Hannity in a curvy blonde façade.

Black delivers a few Lifetime movie moments, peeking across the chasm at a life not urban-outfitted. He extends warmth (after initial fear) to McCain’s 23-year-old veteran brother, reflecting on his own views of military, war and guns. It’s also obvious that although they snipe at each other like siblings, Black eventually takes on a parental perspective, thinking back to his own mid-20s and the certainties that accompany youth — certainties that McCain has only just begun seeing the cracks in.

McCain is agonizing at times, acknowledging her advantages in life and opportunity while still harping about the bootstraps others should be pulling on, a disconnect that is familiar to the point of cliché in these Rand-soaked times. That said, she sounds like the absolute best drinking buddy around, hitting up Vegas strip clubs (with backstage access!) and pounding shots with the entertainment while getting choice rooms and unlimited comps, perks that send Black reeling, and that offer an M. Night Shyamalan-ist twist that “the liberal is a conservative!” and “the conservative is a liberal” (cue Bernard Herrmann). This is what serves as the book’s high drama.

Most telling from “America, You Sexy Bitch” is a conversation with John McCain’s legislative director, Joe Donoghue, who got his start with the then-freshman senator in the mailroom and never left his side. Donoghue’s comments, given while he was waiting for McCain to finish a vote before dining with the authors, show politics without the vitriol and bared teeth, a side that isn’t sexy enough for airtime. “Somebody’s got to keep government functioning” is Donoghue’s outlook, and anger and camera-playing are not tools that accomplish the goal. Sure, this is a comedy book, but the sober moments, like this one, are truly what make the book worth reading.