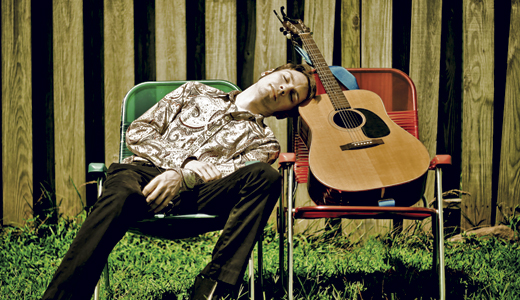 Kirk Kiefer was a frontman in the bar-bustin’ band Yardsale, a key member of the Health & Happiness Family Gospel Band, and a sideman and contributor to more bands than we can count. He recently released his first solo project, Sailing Stones. Kiefer and his band Ice Gondola will celebrate the album’s release with a live show at ZaZoo’s on Saturday. Warning: Sarcasm ahead.

LEO: When last we heard from you, it was as part of the band Yardsale. What might listeners find different on Sailing Stones? What about similarities?

Kirk Kiefer: There was a pretty big Rolling Stones influence on Yardsale that isn’t present much at all here, so it’s a bit poppier and less rockin’ than a lot of Yardsale stuff. Having fiddle and different musicians on SS gives it a different sound, too, of course. That said, I wrote songs for both bands, sang in both, and both have the same rhythm section, so it’s not like Yardsale sounds like Slayer and SS sounds like Rick Astley … because more than anything, my music sounds like Nickelback.

LEO: The album features an impressive list of supporting musicians. What can people expect to see on stage at your album release show?

KK: Awkward, occasionally funny banter, all the SS tunes, some Yardsale favorites, some choice covers, saxophones, acoustic sets, perhaps a dwarf or two? As far as who — well, Ice Gondola has instituted an open-door band membership policy; so, if you come to the show with anything that can be construed as a musical instrument in any way, you’ll probably end up on stage.

LEO: Is there a song on the album that is closest to your heart?

KK: Songs are like children — you don’t choose favorites in public, lest the children hear and get angry. But, I am especially fond of “Falling Ahead” due to the Beach Boys-ish vocal arrangement it has. “Lust From Afar” is a big favorite, too, if only for the uncomfortable laughter it causes.