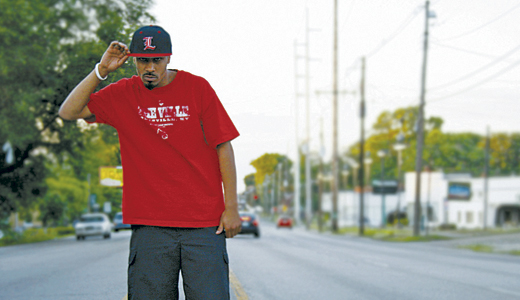 T. McAfee’s debut album, Courtesy of Self, was described in these pages as one of the best hip-hop albums this city has ever produced. That was four years ago, and since then Louisville has seen some excellent competition for that crown. McAfee has finally returned with his long-anticipated The Prequel, and though it may not live up to the high bar he set with his first, it’s still a satisfying set, largely produced by regular collaborator Hines-57. LEO sat down with McAfee to set the record straight.

“I didn’t spend the whole four years putting it together,” he says. “I had the name right after Courtesy of Self, but it’s not like I had the tracklisting or anything like that. Outside the studio, of course, you deal with life. I graduated from U of L in spring 2009. I had a few other things going on at that time, and really thought about putting the mic down for a while. It seemed like the more I worried about music, the less likely I was to get anything accomplished. But the longer I kept away, it was like the samurai trying to hang up his sword; everybody’s still trying to test your blade.”

While McAfee has done several collaborations, most notably on 2010’s Pioneers of the NuLu with Mr. Goodbar, Jalin Roze, and D. Fresh, he throws some cold water on the idea of a collaborative free-for-all with Louisville’s scene. “You don’t have to go out of your way to fool with everybody. Not everybody is going to mesh well. You could get the best quarterback in the world with the best coach, but that doesn’t guarantee a winning season.”

He continues, “There are a lot of people that you’ll run into, and they’ll want to collaborate on a song or something, and they know I spit, but they haven’t really heard any of my music,” which makes no sense to him. Pointing to his work with the Inn Crowd and friendship with T-Razor and others, he closes, “You might see me out here alone, but that doesn’t mean I’m on my own."