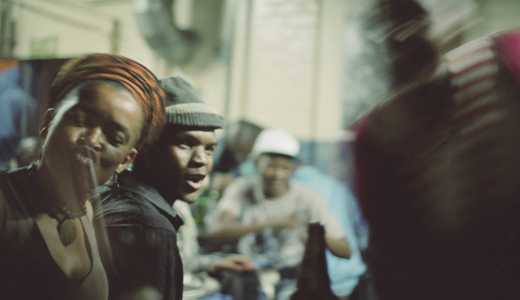 Last Thursday night, South African artist Yolanda Dlamini and I sat on the corner of Seventh and Main streets talking about “The Cosby Show,” a strange conversation to be having with someone raised halfway across the globe who only arrived in Louisville two months ago. This, however, was part of her answer to my “Why did you come to Louisville?” line of questioning.

“The Cosby Show” was the answer, in part. Wanting to lay her eyes on the America she grew up knowing through our cultural exports, a desire to see what was beyond the Huxtables’ living room, plus friends and serendipity, all added up to bring Dlamini to the River City. She wants to explore America’s smaller cities before heading to New York City in October, where she will spend the rest of her time on her six-month visa. She admits that smaller cities have made her adapt her usual artistic practice of shooting photographs of people on the streets: “The streets just aren’t as full here.”

After seeing her photographs of Johannesburg, on display now at the Tim Faulkner Gallery, it’s easy to understand why it may seem that way by comparison. Displayed beside a small show of her paintings called “Face It,” Dlamini refers to her black-and-white photo show — and her hometown — as “Josie, my Josie,” a tribute to her sentimental feeling about the bustling city.

The photographs, taken on film and digitally, were often snapped by the artist as she cruised through the city in cars and buses. Store fronts, open fruit markets, stacks of plastic bags, clothes on lines, and kids in swimming pools seem both foreign and familiar. Hip kids in antique-y clothes, shoes and glasses get their fair attention, and, in my favorite photo, a fashionable young black woman with an impressive pompadour sits in the park with a friend who is offering her a slice of a snack, his knife flashing into the camera as she laughs explosively.

Dlamini photographs young people in street-side hair-braiding salons, selling Santa Claus hats with blonde braids by the armful, a Muslim woman in full veil ordering at a food counter — scenes to her that seem both ordinary and sacred — and now that she is away from them, like memories. “I wanted to do them (the photos) in black and white to show how most of what I photograph is a continuation of the past,” she says.

What will Dlamini’s photographs of Louisville reveal? It seems this promising young photographer is participating in the tide of cultural observation and criticism of the United States. Whereas America used to be the exporter of culture, as technology becomes ubiquitous outside our borders, we will increasingly see ourselves through the eyes of others. Not to worry, though — if anyone understands what a mixed bag it is to be an American, it’s someone who’s spent time thinking about what it means to be from another place more complicated that a sitcom.