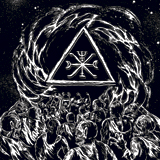 When Indiana extremists Harlots opted for indefinite hiatus in 2009, the underground scene quickly lost an innovative act. Now their key anchor, Jeff Lorhber, has reappeared with Enabler, a band similarly schooled in caustic genre cutups and contortions. All Hail The Void follows in the path of many recent d-beat hardcore revival bands: furious and to the point. This is punk music played by metal musicians oozing with a technical flair unparalleled by their bandwagon peers. It’s refreshing after hearing new groups doing the same thing, but with much less skill. This flipped expectation delivers an album of attention-deficit-paced songs, traversing a disjointed ebb and flow of speed and groove. What Enabler loses in originality, they make up for it in talent. All Hail The Void is the blistering soundtrack to our modern ills and heat wave-irritated summer.