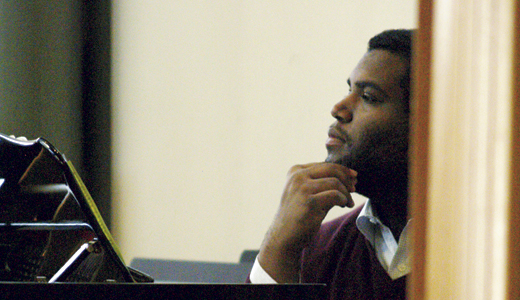 Phillip Morgan lives near his church, First Unitarian, where he serves as choir director, and often walks in the morning. He uses this time to listen to his iPod, which is filled with Sondheim, Dolly Parton and Beyonce. He sings along occasionally, which he says garners some odd looks from passersby.

While these modern tunes satiate his ears, they are not what his voice craves. It’s mélodie — the French style that represents the antithesis of folk or pop music — that really touches him. He particularly favors one composer in this genre, Henri Duparc. “I think I have performed six of (Duparc’s songs),” Morgan says. “My goal is to do all of them. Everything he wrote is gold to me.”

Latching on to a paragon in this way is not unusual for Morgan. He cites Bryn Terfel Jones, a British opera singer, as his greatest influence. “I have every CD he’s ever done to date. I remember when I was first in college and started taking voice lessons, I’d just do this Bryn Terfel impression every week. I eventually stopped being this 40-year-old Welsh baritone and came into my own.”

Around this time every year, Morgan takes a moment to reflect on just how much he and his art have developed. Eight years ago, Morgan had already taken the bull by the horns as Escamillo — the bullfighter in the famous opera “Carmen” — while a student in the vocal program at the Governor’s School for the Arts. The now-24-year-old singer has just begun his senior year at U of L and has been an active part of the internationally acclaimed Cardinal Singers, the university’s choral ensemble.

Morgan has nothing but praise for the Cardinal Singers, with whom he has performed in Cuba, Germany and South Korea. “(Being a part of the Singers) pretty much defines everything I do musically,” he says. “Everything I do employs something I’ve learned from being in the Cardinal Singers, from attention to detail to hard work. It has broadened me as a person and as a musician. It’s probably the best thing going on at U of L.”

So what’s next for Morgan? With school in full swing and a change of jobs in the works (he’ll be leading the choir at Central Presbyterian beginning Sept. 1), things are beginning to get hectic again. He says his work is his biggest focus right now, as well as keeping alive the friendships he made while at First Unitarian.

On the long term, he intends to pursue a master’s degree — perhaps from U of L — but is unsure of his next field of study. Ultimately, though, he says he’d like to conduct in a setting where he can teach his vocalists to have as much fun as he does. Part of this may involve broadening his students’ horizons. “Everyone says they don’t like opera,” Morgan sighs, “but millions of brides walk down the aisle to the ‘Bridal Chorus’ from Wagner’s ‘Lohengrin.’ That’s opera. People like opera and don’t know it.”