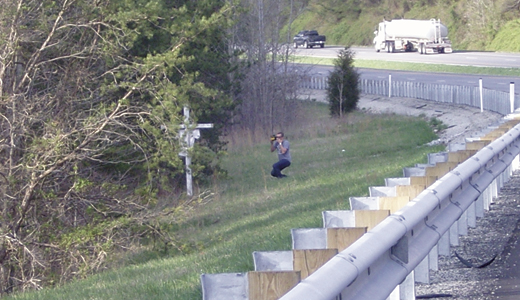 Phillip March Jones is not a photographer. Or, at least, that’s not how he’d introduce himself. It’s his two “real” jobs that appear under his signature in emails — Jones is the curator of Institute 193, an independent contemporary art space in Lexington, and the director of the Souls Grown Deep Foundation in Atlanta, which helps cultivate a national and international regard for African-American folk art of the South.

Photography is, however, the major component of Jones’ newest gallery exhibition, “Points of Departure” (complete with eponymous companion book), which will open at 21c Museum in October.

The project is comprised of 139 photographs of roadside memorials: monuments lovingly constructed along motorways by bereaved families, often adorned with personal effects, in memoriam to relatives or friends who were victims of fatal vehicle accidents. It is, in its essence, a full disclosure of the secrets most of us ignore as we race by at 60-plus miles per hour. The photographs took a total of eight years to assemble, as Jones took the Polaroids as an organic supplement to the road trips he already makes for work.

Michael Fleck, who helped Jones fundraise and is thanked in the book’s dedication, describes Jones as the ideal colleague. “It was inspiring how much energy and intent (Jones) poured into the project,” he says. “It was never a matter of how to promote the work or cash in on his idea but a matter of how to best tell the story, which was shown to him.”

Making sure the story remains unaltered is integral to Jones’ work. He snaps the shutter … and that is all. What he sees is what you see: The photos are not retouched, and in the book, they are even printed on non-gloss paper to maximize their impact. Despite this, there is nothing stark about these images. The film lends to the memorials a softness of line, as do the tall grass and other natural materials that border each photograph.

Just as photography is not his profession, mere documentation is not for him either. In fact, he says, “that’s bullshit.” This misconception about his work often arises when someone in the blogosphere misinterprets the table of geographic coordinates in the back of Jones’ book as an attempt to catalogue. “I’m not egotistical enough to think that I understand the intentions of everyone who puts out a commemorative sculpture,” he says. “I’m not studying them as art objects. I’m just trying to put you there.”

When asked if he would recommend taking a road trip to see all of the memorials he painstakingly captured, Jones replies, “No. It’s kind of like how once you see someone wearing a pair of glasses or shoes, and you love them, you start seeing them everywhere. Once you’re aware of (roadside memorials), you can start to enjoy them wherever you may be.”