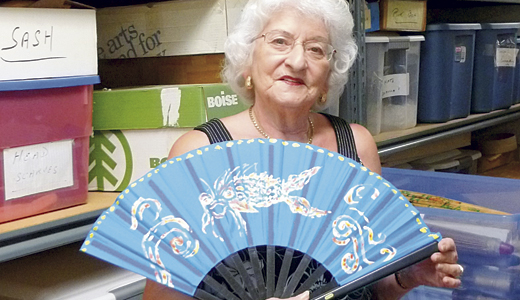 She’s the longest-running star of the Kentucky Opera but never appears on stage. Josette Miles — or simply Josette, as she is known — begins her 29th season this fall as costume mistress of the opera. She’s a behind-the-scenes empress of gowns and crowns and is very good at what she does.

“Everything has got to be perfect,” says Josette, a native of Nancy, France, who, of course, touches her English with a French accent. “The singer come. I fit them. So we get the pants, it is too long. Is too short. Is too wide. Is too tight. I fix it. And my theory is, if a singer knows he looks good, he don’t worry about how he looks in his costume. He project better. You know, if he has got a little safety pin somewhere he is worried about, he is saying, ‘Oh, gosh, I hope it doesn’t pop open while I’m singing.”

Which could happen to some singers on some stages. But not Josette’s. At her level, the costume mistress is less concerned about costume failure than costume success. She adorns the singers as elaborate set designs transform the stage — to create the theatrical atmosphere of grand opera. “To me, the clothes is the man,” says Josette. “If they know I make them look good, they sing good.”

Josette’s 29th season is also Kentucky Opera’s 60th, and the company begins with “Tosca,” Sept. 21. “In ‘Tosca,’ you have a religious procession, so you have to get the religious habits exactly as the research says they wear it. You can’t just be counting on an ordinary priest’s cassock, but the outfit of a cardinal, in all its color.”

Attention to detail was instilled in Josette long ago, studying classical dance as a child in pre-war France. “In Europe,” she explains, “my training was you dance, but you also learn to make your costumes. And you wish your costume to be beautiful, so I knew how to sew.”

From tragic “Tosca,” Kentucky Opera turns in November to Massenet’s “Cinderella,” and Josette promises the unlikely belle of the ball will dance until midnight in the most beautiful gown. But watch out for the Fairy Godmother. “They want her to be a little crazy, all flashy.”

February’s “Don Giovanni” is set not in the 17th century Europe, as Mozart placed it, but instead in mid-20th century American noir. And Josette is already thinking slim black tuxedos and 1940s hats. For such major productions, Josette is assisted in sewing by Mary Vessels, whose association with Kentucky Opera dates to the days of founder Moritz Bomhard.

Josette’s studio, sandwiched between the Brown Hotel and Brown Theatre, is a jam-packed warren of the smaller bits of costumes. Just the first set of shelves is packed with boxes labeled: Spanish hats, chorus hats, Boheme scarves, Boheme sweaters, head wraps, parasols, Japanese fans, and more. But what Josette has the most of is shoes — shoes that must be period for so many periods — for kings and queens, peasants and policemen.

Even Josette’s studio seems period, with a view out the windows of rooftop cooling systems and steam pipes. Like the rooftop view, one imagines, of the penniless Bohemians of “La Boheme.” But ever the castle of the costume mistress.

Josette does have one pet peeve: singers who arrive to be fitted wearing no underwear. It’s now even written into contracts that the singers must wear underthings to their fittings. “I got one of them one time,” says Josette. “The pants don’t fit. I know I got to open the back to see how much I have to pin. So I go over there and get the big scissors. I come back snapping them open and closed — snick, snick, snick. He says, ‘What you going to do?’ I say, ‘I got to open the pants. And anything that is loose in there I cut it off.’ He say, ‘Can I come back tomorrow?’”