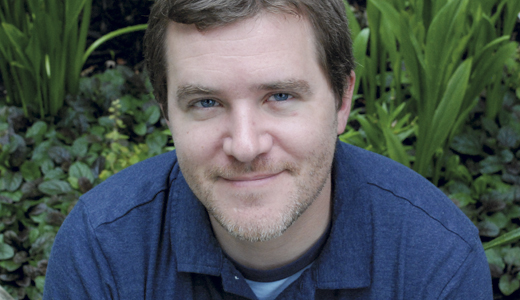 He’s easy to accidentally stalk, especially if you go to a lot of plays, because he’s everywhere — backstage, onstage or in the audience. Brian Walker, the founding father of Finnigan Productions, manages a bookstore by day but dedicates most of his spare time to acting, directing, producing and writing. A theater graduate of the Youth Performing Arts School, Walker started Finnigan in 2004 when he returned to Louisville from Los Angeles and produced his first work, “The Time I was Kidnapped by the Church.” He says he’s not against transplanting himself again in the future if or when the time is right, but he’s cozy here at the moment.

“Louisville is definitely where I’m supposed to be right now,” he says. “I love this city, it’s really nurtured me artistically over the last seven years, and I don’t think I’m ready to leave yet. I think I’m still being nurtured — it’s still happening and I’m still in that process.”

He has written and produced eight full-length plays and a handful of 10-minutes since starting his company, including “dirty sexy derby play,” “Smoke This Play” and “Great American Sex Play.” Many of his short plays, such as “Slut for Kush-Balls” and “Women Who Love Gay Men,” have been featured in the annual Finnigan Festival, which stages a collection of new 10-minute plays, all by local writers.

“I love working with other playwrights, giving voice to other playwrights in the community who want to see their stuff on stage,” Walker says. “I love the community of the actors together — that sort of special thing that happens when everyone’s running around backstage trying to get ready for the next piece, and working with the different directors. I’ve got to say that’s definitely my favorite.”

Other than doing the festival, Walker is taking a break from the stage this season to focus on his writing and work to reach his latest goal: to have one of his plays produced by a company outside of Louisville. The script he’s got brewing right now got some hardcore work-shopping when Walker participated in the Last Frontier Theater Conference in Valdez, Alaska, this past June.

When he’s not performing or buzzing around backstage, he is likely to be spotted in the audience at shows around town with a friend, his mom, or likely, a notepad. Walker writes reviews for TheatreLouisville.org — not to be a harsh critic or scope out the competition. He just enjoys experiencing theater, and analyzing other theater productions helps his own writing process. “We’re so lucky to have so much great theater, and I think it should have more than one review. That’s good for playwriting, too — because I see a lot of plays anyway — but having to go home and actually write about it is helping me, having to pick the play apart from that perspective.”

When asked if he does anything else besides assorted theater projects, and he flashed a bright smile over his raspberry beer and said, “Well, I like to cook.”