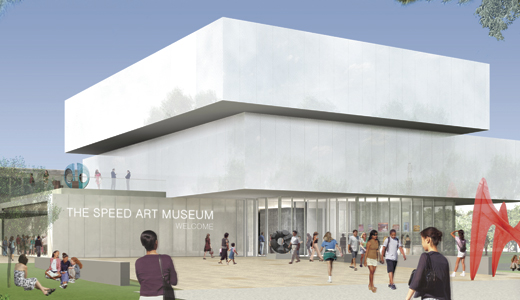 The expansion project, the first of three phases, will enlarge the museum with a glass North Building. The highly anticipated Elizabeth P. and Frederick K. Cressman Art Park and Piazza will also be created.

When the Speed announced the closure last December, the news left many in shock. But as time went on and the idea sunk in, perhaps it wasn’t going to be as bad as originally thought. That is, until the other shoe dropped.

The museum’s Board of Trustees announced on Aug. 15 that the Speed’s director and CEO, Charles Venable, is leaving in September to go to the Indianapolis Museum of Art. Venable is the captain of the renovation, steering the Speed through the rough fundraising waters to reach most of its $50 million expansion goal. His five years of leadership has led them to the cusp of what the museum calls an “unprecedented expansion project … the largest project undertaken by a cultural organization in Louisville.”

His departure timing has its merits. It’s right before the heavy lifting begins, so he’ll miss the on-site logistical problems. With the planning decisions made, he can leave the scene content.

On the other hand, few know as much about the renovation planning as Venable. It must be difficult for him to leave his “baby” before it’s been born. Now it’s up to the museum staff, board and architectural firm to see it through.

The museum will conduct a national search for the next director after it catches its breath from the expansion closing activities. “The Speed is prepared to open the ‘New Speed’ in late 2015,” Board chairman Todd Lowe tells LEO. “We anticipate that the Speed will be an attractive choice to candidates as we begin the search for a new director and CEO.”

The Speed has stood at 2035 S. Third St. since 1927, on 6 acres of land owned by the University of Louisville (the museum has perpetual use of the land as long as it remains on its current site). It has weathered previous restorations, including one in 1996, when it was closed for a year and a half.

As part of phase one, Kulapat Yantrasast, with partners Richard Stoner and Yo Hakomori of wHY Architecture, plan to reorganize the building to make sense of the past additions. The expansion will be environmentally friendly, with plans to apply for the U.S. Green Building Council’s LEED certification. The Board of Trustees decided to close the museum during this phase. “This will be an amazingly big construction site, a giant pit for one-and-a-half years,” Venable says. “Where (would) you get in? Most of the galleries will have to be empty.”

The museum is lending art locally and around the country. The exhibition “Rembrandt, Rubens, Gainsborough and the Golden Age of Painting in Europe from the Speed Art Museum, Louisville, Kentucky” is touring the country like a rock star, with stops at the Flint (Michigan) Institute of Art, Philbrook Museum of Art in Tulsa, Okla., and the El Paso (Texas) Museum of Art. Other museums are being added to the roster. The rest of the permanent collection will be stored in the current temporary exhibition space away from the renovation activity.

The dates of the other two phases (renovation of the current museum and the building of another structure to the south) haven’t been determined, but it’s expected to take at least a decade. The museum is planning to stay open during those phases.

According to the American Association of Museums, the renovation of the Smithsonian American Art Museum/National Portrait Gallery in Washington, D.C., holds the record for the longest closure. From 2000-2006, it was closed for an extensive $283 million restoration. The glass-enclosed courtyard opened the following year.

The best way to understand the renovation is to check out “Unveiling the New Speed: A Model of the Future” and “Inside|Out” on display through Sept. 23. “Unveiling” features a model with intergraded existing and future structures. The exhibition also has a virtual tour and architectural renderings.

“There are five things we want for the museum,” Venable says. “More gallery space for contemporary art and the arts of Kentucky, visitor amenities like a café, (better) traffic patterns, temporary exhibition space near the front door, use of our property that had not been built on but keep the green space park-like — OK, there’s six — and right-size the institution, because many museums are too big.”

“Inside|Out” gives a glimpse of the sculpture that will go into the Art Park, such as the Speed-commissioned “Silver Wishbone” by Mark Handforth and the recently acquired “Danuta” and “Burnt Pine” by Deborah Butterfield.

With the upcoming closure, staffing has been an issue. Layoffs happened in various areas not required until the museum reopens. Venable says new positions will open up in the future, including a staff photographer and webmaster.

In preparation for its long goodbye, the Speed is presenting “Lights Off/Future On,” a weekend of events Sept. 21-23. The groundbreaking is on Friday, Saturday features family activities followed by “Lights Out Museum,” and Sunday is the final public viewing day.

Once the Speed closes its doors, it will not cease to exist. That’s when “Speed About Town,” their outreach program, kicks into gear. Museum programming will continue in various locations around Louisville. The Frazier History Museum has become a major Speed partner, with members receiving similar privileges at the Frazier that they have at the Speed.

Venable is staying for the weekend of festivities, with his last day on Sept. 23. To see what’s going on at the Speed prior to and during its expansion, go to speedmuseum.org.