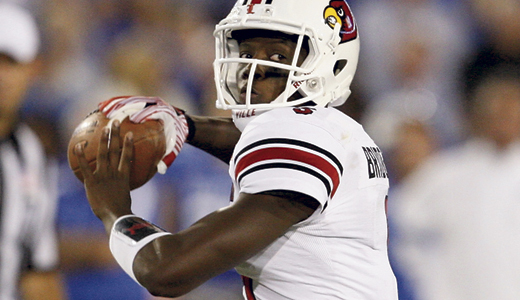 You know wide receivers. They come on the field with a swagger and step off with a strut.

“Yeah, that’s the way they are,” says University of Louisville offensive lineman Alex Kupper. “But that’s a lineman’s dream — to look up from making a block, and see a back flying loose down the sideline. That’s our reward.”

And the dream could quickly become reality. Louisville has a fleet of fast pass receivers waiting to catch the nicely lofted lobs and precision darts of quarterback Teddy Bridgewater — beginning with Sunday’s season opener against Kentucky in Papa John’s Cardinal Stadium (ESPN 3:30 p.m.). Louisville is ranked No. 25 in the pre-season Associated Press poll, and if the Cardinals live up to that forecast, the victories will likely come in a hail of touchdown passes. And one imagines the pass catchers must be dreaming of just such glory, with visions of sugar plum touchdowns dancing in their heads.

But not DeVante Parker. The 6-foot-3 sophomore, who caught a touchdown pass in his first game and went on to be named to several national all-freshman teams, is less interested in swagger and strut than the old-fashioned nuts and bolts of football.

And that’s about all he has to say about it.

In fact, the entire pass-catching crew has a quiet way of going about its work. Play fast, catch passes, and try to get loose down the sidelines. Not a lot of flash and trash talk.

“That’s what’s great about them,” says offensive coordinator Shawn Watson. “They’re gym rats. They’re like the old-time guys who used to just go out and play football all the time. They’re not stuck in their rooms on X-box, they come out.”

And he says Bridgewater is the organizer of the Cardinals’ off-season pitch-and-catch club. “They’ve developed a chemistry with each other, and that only happens when you spend time working with each other,” Watson says. “Teddy ramrods all that.”

Lately they’ve spent ample time perfecting their new West Coast Offense, in which the quarterback throws about a billion short passes, looking for a few breakaways. According to Watson, it’s the perfect offense for Bridgewater.

“He’s not overpowering with the ball. He throws a very catchable ball. In other words, his placement of the ball and how easy it is to catch with an easy spiral on it.”

Plus, the 19-year-old from Miami can scramble.

When the called play breaks down, Watson says Bridgewater’s first choice should be to run: “You always start off scrambling to run.” But if the defense overreacts, then Bridgewater should look to pass.

And that’s the receivers’ second chance.

Which might be a special opportunity for Eli Rogers, one of three Louisville receivers who played with Bridgewater at Miami Northwestern High.

“See, we’ve had a connection for so long that I’m pretty used to him,” Rogers says. “Only now he’s got a much stronger arm, and his accuracy is more precise.”

Rogers won’t say if he and Bridgewater have any special signals, but he smiles when asked.

“I would say once we look at each other and give each other that look, we know what time it is,” Rogers says. “We know this is the play we have to make — right now. That’s just the connection between every receiver and quarterback. Been doing it a long time with him.”

“They’re not the biggest guys, but they’ve got speed, and that stretches the defense,” Stein says. “That’s something I don’t know if we lacked last year, but we lacked experience in our receiving corps. It’ll be exciting to see.”

DeVante Parker adds a vertical dimension. On that first 39-yard touchdown pass in his inaugural game last year, Parker skied high to get it.

While at Ballard High School, Parker made All-State in basketball and football, but he always leaned more toward the gridiron.

“I’ve been wanting to play football since I was little,” says Parker, son of U of L running back Anthony Shelman (1992-94). “I’ve been good at it and want to be better.”

The West Coast Offense certainly sounds like fun, but it wasn’t invented by the Beach Boys. Bill Walsh developed the thing while coaching under Paul Brown with the Cincinnati Bengals. Walsh then moved west to win three Super Bowls with the San Francisco 49ers and quarterback Joe Montana.

Football nuts can go on for hours talking about the West Coast Offense, but we asked U of L fan Jim Knoer, an excellent explainer of sophisticated concepts (including astronomy and killing weeds), to succinctly describe what U of L fans might see this fall.

“What the West Coast Offense tries to do is spread the field to get a guy one-on-one with a defensive man,” Knoer says. “What you want is that guy out in the open, ideally catching the pass on the run.”

The West Coast Offense doesn’t look like offenses employed by power teams, like in the Southeastern Conference. “Teams like LSU and Alabama have those great big guys they want to line up shoulder to shoulder and knock you off the ball,” Knoer says. “The West Coast Offense minimizes size disadvantages by giving faster players more room to operate.”

The offense lines up farther apart, then takes off.

“So when you get the ball to your guy he’s already got momentum,” Knoer says. “If he can make that one man on him miss, then you’re off to the races.”

The big caution on Louisville, of course, is all this off-to-the-races stuff must be accomplished by a team dominated by sophomores. There are 33 of those on the roster, compared to just nine seniors. The imbalance occurred because of a weak recruiting year the season prior to Coach Charlie Strong’s arrival in 2010.

Strong says he constantly reminds his young players to remember the situation Louisville was in the last two seasons, when the team was picked to finish last in the Big East. Now they’re picked first.

“The expectations are out there and there’s no way we can hide from it now,” Strong says. “The key thing for our football team is don’t get caught up in the noise.”

Strong says his job is to build consistency. He notes Louisville has won just seven conference championships in 94 years.

Of course, that stat is a little misleading. For most of those years, Louisville was an independent — not in a conference to win a league championship. But Strong has a point. Louisville has been up and down in recent seasons.

“Defensively, we’re athletic,” says Strong, who came up as a defensive coach. “Looking at what we have inside with Brandon Dunn, Roy Philon, Jamaine Brooks and now with Sheldon Rankins and DeAngelo Brown being two young guys that are coming along to give us some added depth … it starts in the center — the nose guard, the middle linebacker to the free safety. If you’re good down the middle, you’ve got a chance to win a lot of football games.”

The Cards are stacked with linebackers and return all four defensive backs. Defensive coordinator Vance Bedford growls and grins when he says, “The train’s coming. If you don’t get on the train, you’re going get run over.”

Or, as star safety Hakeem Smith puts it, “I want to find their key player and make his day as bad as we can.”

We’d guess Louisville will be better later in the season. The team seems nervous: first time ranked, favored to win the Big East and play in the Orange Bowl.

As for Kentucky, the betting line moved from 10 ½ to 14 points, and that’s the wrong direction. We wouldn’t give any rival 14 points, especially one that’s supposed to be bad but is probably smoldering to upset. Bad juju.

Ideally, you’d like to see a serious goal line stand, a couple fumbles recovered, and a close enough game so the new field goal kicker has to make one when it counts. (None of the candidates has attempted a field goal in college.)

Later, the Cards can get in their West Coast groove, with enough size and speed to do something with a favorable schedule. 9-3.