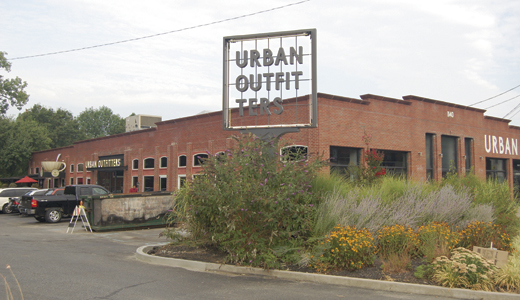 Natalie Hofer, who has owned Highland Coffee Company on Bardstown Road with her husband Greg for 13 years, appreciates the sudden outpouring of support from loyal customers.

Following LEO Weekly’s recent story about the loss of their sign to the new neighbors next door — global trendy retail giant Urban Outfitters — much of the Highlands community has rallied in support of the local coffee shop and criticized Urban Outfitters for what they view as bullying tactics against a small local business. In a little over a week, a Facebook page called “Give Highland Coffee their sign back!” gained more than 350 members.

And though Natalie Hofer is eager to move past this disagreement, she was surprised to learn the city approved Urban Outfitters’ request to supplant Highland Coffee’s signage during a zoning meeting two months ago — a meeting she knew nothing about.

LEO recently discovered that on May 7, the Board of Zoning Adjustment voted unanimously to approve an application by Urban Outfitters for a “Variance Modification/Condition of Approval Deletion.” The original variance was approved in 1990, giving signage rights to the two tenants in the back of the lot, which included Highland Coffee and the now-defunct Knit Nook. The new application, supported by landlord Stuart Flowers, deleted the condition of approval giving signage access to Highland Coffee, instead giving Urban Outfitters the full rights.

When told about the hearing and vote, Hofer says neither she nor her husband was notified. But, she’s quick to add, “We plan to move forward and maximize the other signage options we have and let our customers, old and new, know Highland Coffee is alive and well.”

According to Chris Brown, the staff case manager for the case at the Board of Zoning Adjustment, the applicant and landlord were under no legal obligation to notify the owners of Highland Coffee about the vote because the vote was held in a “business session” and not a “public session.”

“Basically, when items are heard in business session, there is no public notice requirement,” Brown says. “With modifications of conditions of approval in variances like this, they can just go to business session because it’s not an actual new request on a variance or anything. It’s just modifying something that the board has already heard, contemplated and decided on.”

The bylaws for the Board of Zoning Adjustment give only two passing mentions to “business sessions,” but there might also be debate over whether a tenant affected by a variance could have a property interest created by the variance, allowing them notification rights.

And though Brown and zoning staff insist the application was not a modification of the variance — thus negating the requirement of notification — at three different sections in the meeting minutes the application is described as requesting a “variance modification” or “modified variance.”

Metro Councilman Tom Owen, who represents the 8th District where the businesses are located, says the applicants may have followed the letter of the law, but not necessarily proper neighborly etiquette.

“Lord help my soul, I think if a landlord’s going to try to take a sign away from a tenant, that minimally, the tenant ought to know about it,” Owen says. “That just seems to me like Tenant/Landlord 101.”

Owen also says that if business owners in such a case do not in fact have notification rights, there may need to be a review of notification procedures.

According to Board of Zoning Adjustment records from last year, applicants certainly have the upper hand there, as 237 of the 241 total applications were approved.

Landlord Stuart Flowers subsequently told WHAS that Highland Coffee never had any right to the signage, and he tells LEO Weekly that because Urban Outfitters takes up most of the building, this means they deserve full signage.

“They have 85 percent of the center,” he says, “so they’re the biggest gorilla in the room, if you will.”

Flowers also tells LEO he will pay for a new monumental sign at the entrance of the parking lot for Highland Coffee, but per city ordinance, the sign can be only 2-by-2 feet.

Regardless of recent events, Natalie Hofer remains optimistic about a potential meeting with Urban Outfitters.

“We think it can be a mutually beneficial relationship and we remain open to that possibility. I’m sure they plan to be here for a while, and we certainly plan to be here for many years to come,” Hofer says. “The most important part of our business is making great coffee and making our customers happy, and that’s what we need to focus our energy on.”