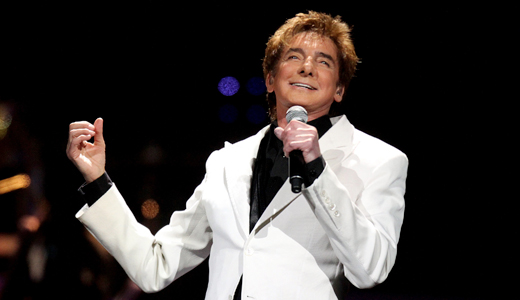 When I heard Barry Manilow was coming to the Palace, I got as giddy as my mom when she was a schoolgirl. I grew up listening to her listen to Manilow and seeing the smile come across her face when his songs came on the radio. I’ve always carried a soft spot for the venerable performer, who seems to keep churning out albums for his devoted audience. His most recent all-original recording, 15 Minutes, debuted at No. 7 on the Billboard Top 200, and his recent Live in London album debuted as No. 1 on Billboard’s Top Internet Albums this year.

Manilow is also giving back to each community he visits. As a part of his Manilow Music Project, he donated a Yamaha piano to the Jefferson County Public Schools and is encouraging people to donate gently used instruments to the schools in return for a pair of tickets (check out manilowmusicproject.org for details). “I’m thrilled to be able to help bring the gift of music to these kids,” he says.

When the curtains open on the Palace stage Friday night, expect his old standards — “Mandy,” “Copacabana,” “Can’t Smile Without You” — mixed with some recent material, like dance number “Everything’s Gonna Be Alright.” I caught up with Manilow Monday morning by phone.

LEO: That’s a great thing you and the Manilow Music Project are doing for local schools. Tell me why this is an important cause to you.
Barry Manilow: I guess it was about eight years ago that I learned because of budget cuts and such that they were cutting arts and music classes all over the country, and it just about killed me — being a musician and realizing that these kids aren’t going to have music in their young lives. I got a grassroots organization together, a few people who worked with me, and we raised money to get brand new instruments into the hands of kids in schools that don’t have any. So far, with the aid of Yamaha and the Hal Leonard Corporation, we’ve given a lot instruments to a lot of schools.

I started asking audiences to give me a hand. I start off by donating a piano to the city where I’m at. And if they bring a few used instruments to the show, they get some free tickets.

LEO: For the last decade or so, you’ve done shows in Vegas. Why leave there and go on a national tour?
BM: I was there for seven years — how about that? I was done. I didn’t want to turn out to be Las Vegas. I had a great time, but it was time to go. This isn’t a big tour — when you say tour, I think of going out months at a time. But these are small one-nighters, and I’m going to cities I haven’t been to in a long time, like Louisville!

LEO: Are your audiences receptive to new material?
BM: Yeah, very. I was really nervous, especially going back to these smaller cities that I haven’t played. I’ve been doing songs from 15 Minutes, and they’ve really, really been going over. The worst thing a performer can say is, “I’d like to do a couple songs from my new album …” And (the audience members) go running up the aisle for orange juice. But these people aren’t doing it at all — they seem to enjoy it.

LEO: Do you ever get annoyed by requests to sing your hits?
BM: No, no. I’m very grateful that people are still wanting to hear these songs. It’s not just the fans that began with me, it’s their kids, and their kids — it’s a big party.

LEO: Do you have a favorite cover of one of your songs?
BM: The first cover anyone did was Donna Summer, my darling friend who I’ll miss forever. She did the first dance version of “Could It Be Magic,” which I did as a big ballad. Out of the blue, she found it and had her producer do a dance version, and it went through the roof. So that would be my favorite.

LEO: Who are you listening to now?
BM: The one I’m keeping my eye on — like all of us are — is Gaga. I can’t believe she’s so mature and so talented and so gifted. Every time I see her perform or have an interview, they are brilliant. I think she’s a real talent. She’s the real deal.

LEO: What’s your preferred way of listening to music?
BM: I’ve got everything. The best way for me is with headphones — then I can actually hear every part of the record. I can’t say I sit down and listen with my headset all the time, but when it’s important, I do that.

LEO: Do you think the press has treated you fairly in recent years?
BM: Well, they beat me up pretty hard in the beginning — but they do that to everybody when you start off. I started off real big, real early with a No. 1 record that seemed to them I hadn’t even worked for it. But “Mandy” came out, and there I was with a No. 1 record, and they just did not like it. They didn’t like the fact that I’m an emotional guy, I wear my heart on my sleeve and do that kind of music. They were uncomfortable with what I do. But it seems things have calmed down, or maybe they’ve just given up. Because I’m not going away. Maybe they’re just leaving me alone.

LEO: With the increasing popularity of anti-depressant use, I think most people can really smile without you. Thoughts?
BM: (Laughs) What’s the question? You can smile without me? Well, I guess that’d be nice if it were true.