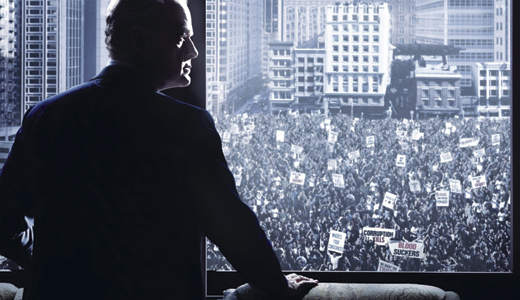 Kelsey “Frasier” Grammer makes a chilling good-guy-going-bad in this Starz series, playing a ruthless mayor of Chicago who secretly suffers from a brain disorder that’s driving him mad, corrupting his memory, and making him unable to trust himself or anyone around him. His loyal lackeys are likewise led astray until his paranoid demands lead them to acts of cruelty and murder that seem justified as “doing what must be done.” What’s really scary is how much this reminds us of the evening news. Our vote for the best new drama on TV.

If you’ve ever dreamed of being a screenwriter, consider this a Ph.D. course. Writer-director Whit Stillman takes a dull premise — strait-laced high-society Manhattan debutantage of the 1970s — and turns it into an surprising comic masterpiece by simply letting the people be smart, aware and interesting. A young man desires only to find romance and a place in NYC society. While outwardly confident, he harbors all the anxieties of anyone who’s alone in a new and awkward social situation. A glorious dialogue-driven party, breathtaking in its depth, now available in a Criterion Blu-ray release.

Schlockmeister supreme Al Adamson is to blame for this historic travesty that must not be confused with the great old Universal Monsters series. Aging vets abound as axe-maniac Lon Chaney Jr. does dastardly deeds for the last Frankenstein (J. Carrol Naish, in a wheelchair) at his beachside horror attraction. In walks Count Dracula (Zandor Vorkov), who offers him the Frankenstein monster (John Bloom) in exchange for a magic elixir. Simply awful, with Russ Tamblyn, Angelo Rossitto, Forrest J. Ackerman, and Kenneth Strickfaden’s original Frankenstein lab equipment. This was the final film for both Naish and Chaney, who deserved better.

GIRL FROM THE NAKED EYE

Writer/star Jason Yee’s dead-end life comes alive when he meets Sandy, a lost, innocent soul in the body of a well-hootered hooker (Samantha Streets). But when she is murdered, he goes postal, doing whatever is necessary to uncover her killer and exact revenge. A surprisingly good, well-written, no-budget indie actioner that deserves a larger audience.

Where do you find the world’s best sushi? If you said a tiny place hidden in the bowels of a Tokyo subway station, then you know your sushi! There labors Jiro Ono, whom many consider the world’s greatest chef, a title supported by the renowned Michelin guide, which awarded his shop the unimaginable rating of three stars (there are none at that level in all of Kentucky). This doc looks at the life and legacy of the 85-year-old, whose 10-seat restaurant is already booked up probably for the rest of his life.

This former Republic serial, routine and formulaic in most respects, is significant for three reasons: 1) It features some of the best cliffhangers of any serial we know, with clever and exciting resolutions; 2) it co-stars Clayton Moore; and 3) Phyllis Coates. Moore, of course, had already starred in “The Legend of the Lone Ranger” the previous year and was TV’s Lone Ranger from 1949-1957. And Coates was TV’s Lois Lane on “The Adventures of Superman” in 1952-53. Recommended.

This straight-to-video (well, sort-of — it was released on one screen, without ads, where it took in $181) teaming of Samuel L. Jackson and Luke Wilson is an interesting psycho-thriller, almost indie-cinema in tone. Wilson, a meek, quiet family man, answers the doorbell one day to find Jackson, who claims his car has broken down. Before he knows it, he’s on the ride of his life with a sadistic, murderous Jackson at the wheel, hurtling toward Wilson’s wife (leggy Leslie Bibb, “Iron Man”) and kids.

This is the sweetest movie we’ve seen in a coon’s age, and that’s not a bad thing. A sensitive and smart 11-year-old girl (Lily Javaherpour) joins a school science fair, aiming to prove that human touch and kindness are forms of life-affirming energy that can make plants grow — and it seems to be causing a basket of raspberries to behave in remarkable ways. Dumb, huh? Well, what happens next is too good to spoil. Watch for Moodles the Robot.

STAR TREK: THE NEXT GENERATION: SEASON ONE

Now available for the first time on Blu-ray: The complete first season, which introduced the world to the exploits of Jean-Luc Picard, William Riker, Commander Data and the rest. On six discs, beginning with “Encounter at Farpoint” (sometimes criticized for introducing John de Lancie’s godlike “Q” too early in the series), the color and sound are exceptional, even better than the original broadcasts, thanks to much improved technology. Be like Picard and “see what is out there.”

One of the more unusual and promising movies of late. Five longtime buds, not thrilled about reaching middle age, head to the woods (after a knife attack and a funeral that we won’t spoil here) where they discover some sort of energy field. They walk into it; each experiences a different psychic effect that interlocks with the others, and each comes out subtly changed. But these changes threaten to rip the group apart as fear and betrayal — real or imagined — take their toll. Worth checking out.

Few people today remember this very early family sitcom, but it set the stage for scores of shows — if not entire channels — to come. Three-time Oscar winner Walter Brennan starred as Amos, the crotchety old coot who, with grandson Luke (Richard Crenna), packs up the family farm and moves from West Virginny to Californ-I-A. It eventually ran to six seasons. This set features the first 39 half-hour episodes on five discs, and co-stars Kathleen Nolan as Luke’s ever-loving wife, Kate.