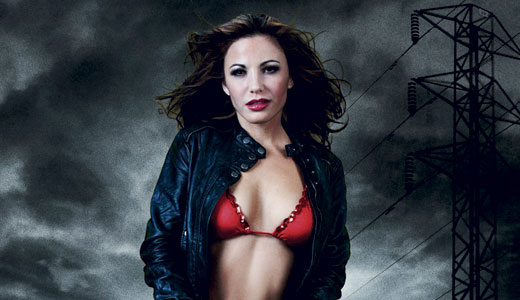 Jennifer Jean Guhlin, aka “Julin,” a veteran of some 20-plus TV shows and horror/action/titty flicks, stars as an exotic dancer at The Pussy Hut who swears vengeance on the sleaze-ball perpetrators of a brutal sexual attack in this earnest and entertaining homage to the 1980s’ “Ms. 45” genre. The finale, a no-holds-barred fight to the death against a truly scary professional hitman named Bull, is just one of many surprises in this no-budget regional actioner from Texas. Good stuff.

TRUE STORY OF A WOMAN IN JAIL: CONTINUES

Another vintage release from Nikkatsu Productions, Japan’s 100-year-old movie house specializing in grindhouse flicks. This one is a sequel to “True Story of a Woman in Jail: Sex Hell,” the progenitor of America’s Women In Prison genre from the late ’60s. Picking up the story where it left off, vengeful inmate Mayumi gets out of solitary confinement, only to find an all new gang of baddies tormenting the female prisoners — especially one particularly young and innocent inmate who is sold to the Yakuza! Mayumi finally explodes in an extended bloody, violent climax that you simply gotta see! You go, girl!

You might be tempted to write this off as just another cutout-bin-filler with some lame star cameos, but that would be a mistake. David Arquette is damn good as the damaged once-big music composer/family man who loses it all in a car accident. Wracked with guilt and emotionally unstable, he becomes obsessed with sexy nutbag Bijou Philips (been there), whose own psycho-baggage may drive him over the edge. Co-stars Vivica A. Fox and Lin Shaye.

This multi-Oscar-winning tale of British Olympic contenders in the 1920s is still a marvel, and it looks and sounds even better thanks to Blu-ray. Ben Cross (who has made some real turkeys in the intervening years) and Ian Charleson star as a mismatched pair that must find a way to beat prejudice and institutionalized bigotry if they are to win. The superb cast includes Ian Holm, Sir John Gielgud, Cheryl Campbell and Alice “Queen of the Borg” Krige, all to the magical music of Vangelis.

Finally available again after several too-small pressings, exclusive listings and other short-sightedness: the limited edition boxed set of “Dark Shadows,” 1966-71’s campy, groundbreaking “vampire soap opera.” Contains 1,225 episodes on 131 discs, plus a grave-load of bonus goodies. This may be your last chance to own this entertaining-as-hell cultural milestone. Do it now.

A mainstream doc (as opposed to the many homemade fan-boy offerings) on the world of mixed martial arts, following a pair of would-be Louisiana stars as they compete in makeshift arenas — including at least one rodeo floor — while they dream of Las Vegas, where riches and fame await. A moving and well-made look at this brutal billion-dollar business.

A long overdue spoof of the “underground dance competition” craze from the Upright Citizens Brigade, starring drop-dead gorgeous TV face Megan Heyn. When her rich, uptight mom (Amy Poehler) forbids her from dancing, she secretly joins a street crew who see her spastic stumblings as an expression of her true self. Of course it all comes to a head in a big, silly dance-off.

A “documentary” — in the same sense that all those “Ghost Hunter”-ish TV shows are “reality” — that follows a quintet of “experts” from Haunted Events UK, a company that “brings you paranormal events at some of the spookiest locations across the UK,” where they encounter — OMG! — real ghosts! Normally we’d be bored to tears, but the spooky English locales, Limey accents and cleverly rigged-up “evidence” are too much fun to crap on. Worth checking out.

A very welcome Blu-ray release of this famous two-hour bio-doc on the life and works of Jimmy Hendrix, told in his own words, voiced by Bootsy Collins. Hendrix performed for just over four brief years, yet arguably had as profound an effect on popular music and culture as The Beatles. Contains a treasure trove of Hendrix’s personal letters, journals and never-before-released — and nicely restored — recordings. Recommended.

JOURNEY TO THE CENTER OF THE EARTH

No, not another telling of the Jules Verne classic — there are more than 20 already, including the one where Brendan Fraser spits on the audience in 3-D — this is a neat Discovery Channel look at just how amazingly prescient Verne was, predicting many of the discoveries that science has made since the story was first published in 1874.

One of those vanity projects populated by (sometimes fading) stars; an excuse to gather friends around and maybe make a little cash. That’s not necessarily a bad thing! Case in point: this fun little mystery about a boozy, once-big Hollywood writer (Robert Miano, “Donnie Brasco”) who becomes embroiled in a murder investigation. Co-stars Danny Glover, Martin Landau, Billy Zane, Michael Rooker and stunning Amazon Meadow Williams. We liked it.

One of Hammer Studio’s most embarrassing later efforts, if damn entertaining. The immortal Peter Cushing co-stars behind the awesome behinds of Mary and Madeleine Collinson, Playboy’s first-ever twin Playmates of Month (October 1970). When one of these two “virgins” is secretly transformed into a vampire, it’s up to Cushing to identify the fem-fiend and save her using every cleavage-enhancing trick in the book! Also includes an excellent full-length doc on Hammer’s Karnstein Trilogy (of which this is part 3), “The Flesh and The Fury: X-Posing Twins of Evil.” Highly recommended.

YOU’RE NOBODY TILL SOMEBODY KILLS YOU