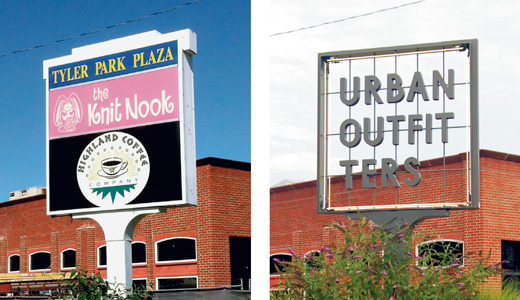 Tucked away in the back of the lot at Tyler Park Plaza, Highland Coffee Company has been a successful locally owned business on Bardstown Road for more than a decade, serving organic fair trade coffee and gluten-free desserts to their loyal customers in the Highlands since 1999.

But their large sign on Bardstown Road — guiding customers to the store not visible from the road — has been taken down and replaced by the new tenants next door, who now fill the space previously occupied by Blockbuster Video.

Urban Outfitters — the popular corporate chain of retail stores specializing in hipster kitsch for a young demographic with disposable income — recently signed a lease with the landlord giving them the full rights to signage to go along with their name wrapping around three walls of the building. They are set to open later this month.

“We were told that Urban Outfitters demanded all of the signage,” says Greg Hofer, who owns Highland Coffee Co. with his wife Natalie. “It was Tyler Park Plaza, now it’s Urban Outfitters Plaza.”

Natalie and Greg Hofer hope that the lack of visibility on Bardstown Road doesn’t jeopardize what they’ve been able to build over the last 13 years.

“We expect our regular customers to keep coming back, but it could potentially hurt our business with people who are new to the area,” Natalie Hofer tells LEO. “You always have to recruit new customers to come in, and often people make an impulse decision to come in once they see our sign.”

The Hofers have made repeated attempts to contact Urban Outfitters to see if there is a potential for compromise on the signage, but no one from the Philadelphia-based company has responded. Not that there hasn’t been zero outreach from Urban Outfitters. They came in Highland Coffee one day with a gift … of job applications for their employees to come work next door.

“They took our sign, they took our space, and now they want our employees,” says Greg Hofer. “OK, we get it, we can take a hint.”

Urban Outfitters and the plaza’s landlord, Stuart Flowers, did not respond to multiple inquiries from LEO Weekly.

“It’s just an unfortunate situation,” Fleischaker says. “Everyone did what they are legally allowed to do, so we’re trying to figure out other ways that they can have representation at the street.”

City ordinances allow Highland Coffee to have a 5-square-foot directional sign, as well as a sandwich board that is no higher than 4 feet tall, both options they are currently employing. However, these remain difficult to see from the road, especially at sundown.

The Highland Coffee owners still hold out hope that space for their sign will return, but are frustrated and disappointed by the actions of their new neighbor.

“It would have been nice if they came in with a good attitude, but they’ve acted more like bullies — just rude,” says Natalie Hofer. “This community tends to take care of its local businesses. Urban Outfitters doesn’t know the neighborhood, and it would serve them well to be more neighborly.”

Besides its reputation for loyalty to locally owned businesses, the Highlands is also known for being one of the most ideologically liberal areas in the entire state. And while Urban Outfitters would appear as a perfect fit — marketing itself to a young and liberal (and wealthy) demographic — the company has taken heat in recent years over its conservative ownership and politically incorrect merchandise.

The unexpected success of Republican Rick Santorum’s presidential candidacy this year brought renewed scrutiny toward the $13,000 in political contributions Urban Outfitters founder and CEO Richard Hayne and his wife have given the conservative candidate over the years. Though Hayne did not contribute to Santorum’s most recent presidential campaign, and their previous CEO Glen Senk was gay, Hayne does not express regret over his contributions to Santorum — perhaps the most prominent American politician to use virulently anti-gay rhetoric, including comparisons of homosexuality to bestiality.

Urban Outfitters has also taken heat from the LGBT community over its merchandise. Earlier this year, they were criticized for selling a card that makes a “tranny” joke. Following California’s Prop 8 referendum, Urban Outfitters discontinued a shirt reading “I Support Same-Sex Marriage” after just one week, citing “bad press” — despite no reports of such coverage.

Last fall, the company faced criticism from the Navajo Nation for selling 21 items with the word “Navajo” — a trademark owned by the tribe — including such tasteful items as the “Navajo Flask” and “Navajo Hipster Panties.”

In recent years, they’ve also been lambasted for selling “Ghettopoly” (a knockoff of Monopoly with horribly offensive African-American stereotypes), a shirt reading “Everyone Loves a Jewish Girl” full of dollar bills, and a shirt modeled by a waifish young woman reading “Eat Less.”

Liberal and feminist online commentators have trashed Urban Outfitters, accusing the company of attacking the very demographic that keeps it in business. Lauren Kelley of AlterNet recently wrote that their business model “feels especially slimy, exploiting young peoples’ desire to be cool and progressive and ironic while supporting a conservative agenda and filling the world with mass-produced, racist bullshit.”

Whether or not a broad demographic is actually “feeding the beast” by shopping at Urban Outfitters is up to one’s own interpretation, but considering the growing success of the company, such criticisms have yet to put a dent in their bottom line.

Will Russell — owner of Bardstown Road’s WHY Louisville store, specializing in Louisville-lovers’ kitsch items and apparel — is hopeful that Urban Outfitters can co-exist peacefully with local businesses in the same market. Russell says that Urban Outfitters choosing to locate to Louisville shows that it is moving up into a different league of cities, and is confident that consumers will keep local businesses afloat.

“I think the people who live here understand, better than other places even, that if you want Louisville to be unique and have these shops that are unique to Louisville, you have to support them,” Russell says. “I think people will continue to do that. Because you can go into an Urban Outfitters in any city, but if you want the Louisville experience, you have shop at Dot Fox or WHY Louisville or Hey Tiger, our independent businesses.”

Despite getting off on the wrong foot with its neighbors at Highland Coffee, Russell hopes that Urban Outfitters winds up being a net positive for businesses in the Highlands, pulling in customers who usually don’t shop in the area, but will also check out the other stores in the neighborhood.

“My hope is that Urban Outfitters is going to try to be a good neighbor and business,” says Russell. “We’re just going to have to wait and see.”

In the meantime, the Hofers at Highland Coffee Company hope that Urban Outfitters improves upon their first impression.

“The ideal outcome would be to not only have our sign returned,” says Natalie Hofer, “but for Urban Outfitters to realize it would be much better for them to come to the neighborhood with the attitude of wanting to be an asset to the surrounding area and existing businesses, instead of the bully attitude of ‘We’re bigger than all of you and it’s all about us.’”