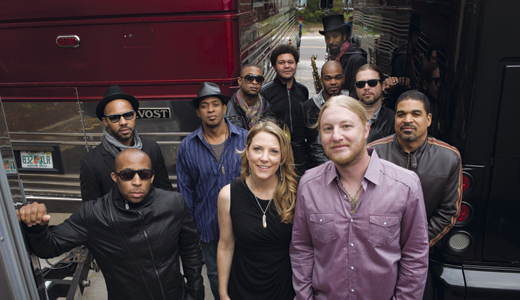 Both husband Derek Trucks and wife Susan Tedeschi have played in Louisville several times, fronting their own bands and, for the first time last year, together as the new Tedeschi Trucks Band. Last year also saw the release of their first album, the acclaimed Revelator. In May, they released the live set Everybody’s Talkin’. LEO Weekly recently caught up with Trucks by phone.

LEO: What made you decide to join forces, rather than continue the Derek Trucks Band and the Susan Tedeschi Band?

Derek Trucks: The timing was just right. We’ve been talking about it for years, but we were so busy with our own things and felt like we had a lot of work still to do with our other groups. But after 16 years on the road with my group, and Susan had been doing her thing for quite a while, it was a good time for a change, artistically and personally. Getting to build a band from scratch is not something I’d done since I was 14, so it was nice starting something from the beginning — spending a lot of time trying to piece the right members together, the right sound, and writing tunes. The whole process was a real learning and growing experience, but it was something I felt like we needed. It’s been a huge shot in the arm — it’s a new start, so that’s a good thing.

LEO: To what extent did your prior touring together and sitting in with one another lead to the formation of the joint band?

DT: I don’t know if we fully knew it at the time, but that was kind of the audition to see if something like this could work. Being out on the road made us realize that it was better for us both to be together, and musically it could work. Those tours were fun, but we really didn’t have time to put a band together and write for it. When we decided to do it, we wanted to do it from the ground up.

LEO: How do you decide what songs you will cover, and who does the arrangements?

DT: It’s kind of a mix of ideas. (Fred Neil’s) “Everybody’s Talkin’” is something that (vocalist) Mike Mattison brought up that might be a fun tune to do. Susan knew it from the Harry Nilsson version. We were somewhere on the road and we heard this great Bill Withers version that was kind of more funked, and we thought it would be cool to do a hybrid.

With a lot of things like that, we experiment with them. We’ll try them at rehearsal or soundcheck, and if it flies, it flies; if not, then nothing was really lost in the effort. Certain tunes work, certain tunes are more fun to rethink, and some the melody itself is so strong, you just support that. (The Lovin’ Spoonful’s) “Darling Be Home Soon” I thought was a great vocal for Susan — it’s such a memorable melody, the ebb and flow of it, I didn’t think about messing with it too much. With 11 pieces, the band is really sensitive to supporting whatever tune we’re playing, or supporting her voice, if that’s what the tune calls for. Where, with something like “Everybody’s Talkin’,” you kind of re-imagine it and make it a full band workout.

LEO: What is similar and what differs from your work with your band?

DT: There’s times where we get to certain tunes that are free and open to interpretation, and those feel definitely similar to what I was doing with my group, and the Allman Brothers, for that matter. The musicianship in this band is such where we can really go anywhere — the band is really open to anything — that’s something I wanted to make sure we continued with this band from our last group. But the difference is that I don’t feel like I have to carry as much. It’s a different bandleader role — you’re kind of quarterbacking a full 11-piece offense. The amount of music that comes off the stage from any given night is pretty impressive. It’s been a great tour, and I feel like the band is really starting to gel in a different way. It’s been three or four major steps forward since we’ve been on the road, and it feels like we’re on the verge of another one.

with The Wood Brothers