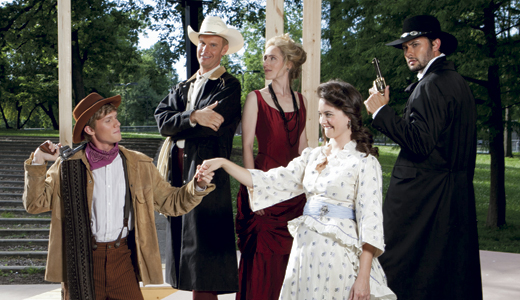 All the world may be a stage, but this summer Louisville theater-goers should head to Central Park for Kentucky Shakespeare’s delightful slate of summer fare. The oldest free outdoor Shakespeare festival in the country, Derby City’s Shakespeare in the Park has been delighting local audiences for more than 50 years. This year promises to be another winner, with crowd-pleaser “Much Ado About Nothing” leading off the season.

The witty comedy centers around the tempestuous couple of Beatrice and Benedick, whose battle of wits includes some of Shakespeare’s cleverest repartees, and one of his most endearing, realistic romances. This summer, the iconic duo is brought to the stage by Liza de Weerd, a native of the Netherlands, and Grant Goodman, who recently wowed Louisville audiences in Actors Theatre’s production of “In the Next Room.”

“Much Ado” holds a special place in the legacy of Shakespeare in the Park. In 1960, it was the first outdoor production put on by Kentucky Shakespeare’s predecessors, The Carriage House Players. The performance, at an art fair in Central Park, marked the first step in the group’s transformation into Shakespeare in the Park. The company returns to the beloved classic this summer, in a reinterpretation by visiting director Jane Page that transplants the Elizabethan text into an Old Western setting.

Billed as “Gunsmoke meets Shakespeare,” the production places the fiery Beatrice and Benedick in a saloon, surrounded by a slew of comic characters that fill out the rollicking comedy of mistaken identities and unexpected romance. Page explains her choice of aesthetic: “My immediate challenge in approaching this comedy was to find a locale and period that spoke to me, a setting that would reveal insights into the play and the characters as well as make it instantly accessible to the audience. I believe that a small, late-19th-century town in America fills the bill perfectly. I think that Italy (note: the play is originally set in the town of Messina) was as exotic a frontier to Shakespeare as the West is to us today.”

Page has been working with outdoor Shakespeare festivals across the country since 1978. She describes settings like Shakespeare in the Park as “a wonderful, though challenging, venue, which provides a remarkable opportunity for a group of theater artists to ‘make it work.’” She also emphasizes the enormous boon such an organization offers to a city, adding, “If an area is fortunate enough to have a free public festival, the productions offer a remarkable resource for a community. These performances allow all people to come together, participate in an event, and share a story.”

In August, “Much Ado” turns the stage over to “Measure for Measure,” a complex drama presented by The Players, Kentucky Shakespeare’s youth ensemble. The cast of high school students participates in an eight-week intensive camp, which includes daily classes in movement, voice and acting, and culminates in the full-scale production, offered to the public.

Director Will Salmons says the play serves as “a showcase of what young actors can do with Shakespeare.” Most of the cast members have been attending Kentucky Shakespeare camps for years, working diligently for their chance to grace the main stage. Playing up to five roles each, Salmons gushes, “This group is incredibly smart. Of course there are challenges within the script, what with themes and language, but they understand the difficulties and parameters of this particular show.”

Since The Players share a set with the main stage production, they must find an aesthetic that fits with the larger show’s set design. This year, Salmon chose Old World Spain. He also plays with gender roles and cross-casting, giving the production a fresh, contemporary twist.

While many critics consider “Measure for Measure” to be one of Shakespeare’s most challenging plays thematically, Salmon had no qualms about tackling it with a younger ensemble. “For me, it’s a wonderful play about loyalty and standing up for what is right,” he says. “This is a huge thing many of my actors are dealing with in their own lives, and they are eating it up.”

Ultimately, the camp and Shakespeare in the Park serve to expose people to the vibrancy and incredible humanity of Shakespeare’s work, taking his timeless plays and sharing them with a wide audience. This summer’s festival offers something for everyone, including weekend concerts preceding the performances of “Much Ado,” as well as outdoor movie screenings.

Describing her experience with “Much Ado,” Page sums up the festival’s aims: “What draws me to Shakespeare are the stories, the language, the human condition, and connections imbedded in the plays. There is something remarkable knowing that you are participating in a ‘global love affair’ with Shakespeare.” This summer, for the 53rd year running, Shakespeare in the Park promises to keep the romance alive, one iamb at a time.