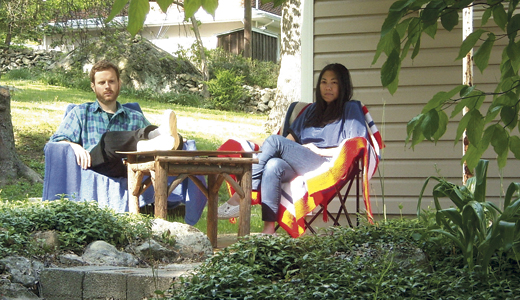 The two main components of Blues Control are Lea Cho and Russ Waterhouse, a guitar and keyboard duo from Queens who embraced new experiences while writing their Drag City debut, Valley Tangents.

A sprawling outline of shifting landscapes emblazoned on the album cover suggests a breath of good travel. A new spiritual equality of tension and space is introduced within their instrumental expressions, largely channeled through interactive movements. Filtered by a lo-fi setting, the bodily narrative their groove evokes is a bizarre, desolate dream.

LEO recently connected with Blues Control to discuss life with an open mind.

LEO: Were you in an unfamiliar environment during the recording process of Valley Tangents?

Russ Waterhouse: We moved (to Pennsylvania) around the time we made the record, so we were kind of exploring the area. We kept traveling back and forth from the studio, and we also did a record not long before this with Laraaji. We were sort of working on two records simultaneously, traveling a lot around Pennsylvania and New York state.

LEO: A lot of your previous material was more drawn-out and textural, where on Valley Tangents there’s a different dynamic that, for me, is animating. Do you think that way about your music?

Lea Cho: Yeah, definitely. I think it’s impressionistic. We definitely try to evoke environments or feelings with each song.

RW: It’s a little more musical where the earlier material may have been more obscure, but we’ve always written songs with structures.

LEO: Do you feel the instrument you play has a narrative voice?

LC: Sometimes it does feel like we’re writing a duet in certain songs, especially like “Love’s a Rondo,” because there’s a lot of interplay that we worked on.

LEO: Same with “Iron Pigs” — it’s almost like a caricature.

LC: We were definitely influenced by, specifically, industrial music like arena rock and anthems. It was a (Miami) Little League team, which is how we got the name for the song.

RW: There’s a big steel industry in this area, so there’s abandoned processing plants that are now being converted into art facilities. So it’s all kind of …

LEO: Listening to your live recordings, I feel like you guys could DJ a party.

RW: We would definitely like to do that. We have DJ’d bars, shows and even baby showers.

LEO: If you could associate Blues Control with a food item or dish, what would that be?

LC: The most obvious would be boiled peanuts, because we have a song called that (laughs).

RW: We also have a song called “Mashed Potatoes.”

LC: “Boiled Peanuts” we actually named after we toured in Florida and ate boiled peanuts.

RW: For the first time.

RW: I think we had to make a decision not to make any more food items.

LC: We had this song we called “Appetizer,” too … after three songs we stopped (laughs).