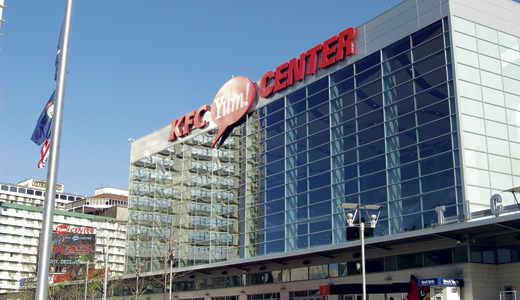 A new chapter for the KFC Yum! Center began last week, as AEG — the national entertainment company that has helped book concerts since the arena’s opening — finalized its contract to take over operating duties at the arena from the Kentucky State Fair Board.

The move was first put in motion this winter, as the Arena Authority struggled to pay back debt on $349 million in construction bonds, with revenues from the downtown Tax Increment Financing (TIF) district and net income from the Yum! Center lower than expected.

While an audit commissioned by the Arena Authority found the Fair Board’s operating costs at the arena to be the main impediment to higher profits and a stronger financial footing, a whistleblower lawsuit filed in April by the Yum! Center’s former general manager paints an even uglier picture.

In the lawsuit, Ted Nicholson claims Kentucky State Fair Board president and CEO Harold Workman fired him in retaliation for being too forthcoming about mismanagement at the arena. Nicholson not only claimed that there was wasteful spending by the Fair Board, but he said “employees were handpicked by Mr. Workman, and many of these individuals were personal friends of Mr. Workman and/or woefully unqualified for their respective positions.”

Such allegations mirrored claims made in LEO Weekly’s March 7 story on the Fair Board, which revealed questionable hiring practices and exorbitant raises for both merit and non-merit employees.

In the aftermath of the AEG takeover, even more questions have arisen over where some former Yum! Center employees have landed within the state agency, including two who have close personal ties to Workman.

Following the announcement that AEG would assume responsibility over Yum! Center operations, Kentucky State Fair Board employees at the arena waited to see if they would move to another department at the state agency — where the retirement pensions are sweeter and there’s the possibility of strong job security with a merit position — or be hired at the arena by AEG, who is on a mission to cut operating costs, which likely means a wage cut.

After the AEG deal was finalized, the Fair Board said in media reports that 33 of the roughly 40 arena employees were kept on by AEG.

At least three of the Fair Board’s arena employees were reassigned to other jobs in the agency, two of whom LEO learned about through internal emails.

Sherri McCoy, an event coordinator at the arena, was hired as the director of the Kentucky International Convention Center, which the Fair Board operates with roughly 43 full-time employees. A job description obtained by LEO through an open records request with the state’s Personnel Cabinet says McCoy was not responsible for supervising any employees as event coordinator, a position she also held at the fairgrounds prior to her stint at the arena.

McCoy is the daughter of David Snowden, the CEO of Triangle Talent Inc., a booking company that has been one of the largest contractors for entertainment at the State Fair and Expo Center for more than 30 years. Snowden also spent 12 years as chairman of the Louisville Convention and Visitors Bureau, of which Harold Workman has been a longtime board member.

Citing McCoy’s close ties to Workman through her father, one Fair Board employee tells LEO — anonymously, fearing retaliation — that McCoy has bragged to coworkers that she “grew up on Harold Workman’s lap.”

Through another open records request earlier this year, LEO learned that Sherri McCoy’s husband also received a questionable promotion at the fairgrounds in late 2008. Kevin McCoy went from being a maintenance section supervisor — overseeing employees in the grounds and horticulture branch — to the assistant director of the Expo Center’s operations division, essentially second in command there.

Despite the “approval for hiring” form for Kevin McCoy’s interview process saying “no other candidate had ever worked at a facility of this nature or had experience in a venue like KEC,” sources at the Fair Board say two more qualified branch managers at the Expo Center were not even given an interview for the merit position despite applying for the job.

Records also show that for a year and a half, Kevin McCoy supervised his wife’s direct boss at the Expo Center.

The same Fair Board source also tells LEO that Sherri McCoy’s promotion to director of the convention center “makes as much sense as promoting the guy responsible for mowing the grass at the fairgrounds into the assistant director’s position.”

The now-former director of the Yum! Center, Ted Milby, also landed a merit position at the Expo Center, where he is a maintenance supervisor. As LEO previously reported, prior to running the Yum! Center — one of the country’s premier arenas — Milby was a facility coordinator for a woodworking company in Campbellsville, and several Fair Board employees have told LEO he is a fishing buddy of Harold Workman.

The only other Yum! Center employee that LEO has discovered (from another internal email) gained a job elsewhere in the Fair Board is Barbara Sipek, who went from administrative specialist at the arena to a position in the agency’s Venue Services division.

Barbara is the wife of Mark Sipek, executive director of the Kentucky Personnel Board, which conducts investigations into merit system violations at state agencies, serving as “an impartial adjudicator of employee-employer disputes for state government.” The Personnel Board is currently investigating alleged abuses in hiring practices by the administration of former commissioner of agriculture Richie Farmer, and will consider a case against House Majority Leader Rocky Adkins next month.

As LEO reported in March, the heads of four Fair Board divisions received significant raises at the end of 2008, making anywhere from $12,000 to $25,000 more per year. Two of those individuals returned shortly after retiring and are now “double-dipping,” meaning they’re collecting a government pension and government salary. Kentucky State Fair Board spokeswoman Amanda Storment subsequently explained that such raises for three of the department heads were due to an increase in employees and business with the addition of the Yum! Center.

Given the arena is no longer the Fair Board’s responsibility, LEO asked Storment if these positions in Human Resources, IT and Venue Services would return to their former salaries, as well as questions involving the hires mentioned in this story. As of press time, she had not returned requests for comment.