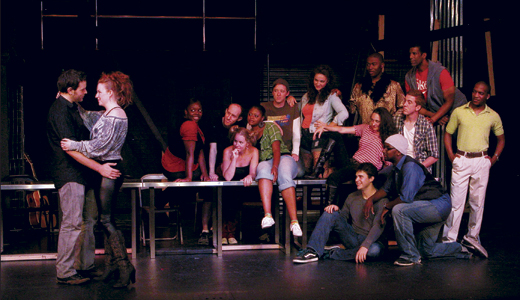 Abstract and nonrepresentational art is an acquired taste. A lot of artists love it — it looks simplistic but is not. Adam Horton is one of those artists, using texture, large size and color to convey the emotional subject matter. Or, as he says, “Creating something from what others might consider nothing defines what I do.” Horton often uses material he finds scattered around the city. “I see the dualism between nature and society in everyday life and look to express how they serve to both hinder and help one another,” he says. “The interaction between nature and industry greatly influences my work. I make use of the materials at hand, whether it be unearthed limestone, reclaimed lumber or alloys from various industrial parts. I find beauty in things left behind.” —Jo Anne Triplett

Most of today’s finest blues-rockin’ guitarists might live in New Orleans, but Anders Osborne is probably the only one of them from Sweden. The tough-looking dude moved to the Big Easy in 1985 and has released 11 albums since, including this year’s Black Eye Galaxy. NOLA’s OffBeat magazine has named him “Best Guitarist” and “Best Roots Rock Artist,” and he’s graced festivals from Bonnaroo to Hollowbaloo with his expressive, soul-fired playing. This is a chance to catch the master, whose influences range from Robert Johnson to John Coltrane. Nashvillians Lynn Taylor and the Bar Flies open, and a cash bar will be available from 6:30 on for those who need that li’l extra something to get past those blues. —Peter Berkowitz

Though retirement marked the end of 2:30 a.m. wake-up calls for Barry Bernson, it didn’t mean the quirky newsman’s storytelling days were over. His new memoir, “Bernson’s Corner: A Reporter’s Notebook,” recounts the unorthodox path that led him to journalism — from starting a neighborhood paper at age 7 to flunking out of college and landing a paying newspaper gig. During a career that spanned four decades, Bernson worked in print, radio and, most notably, TV news, with stints at WAVE-3, WHAS-11 and, ultimately, WDRB, where he spent his last eight years on the job as morning show co-anchor. Fans can see Bernson in action once again as he discusses and signs copies of his memoir, which includes a DVD featuring 10 of his best human-interest stories. —Sarah Kelley

It’s been a while since “Rent” has graced a Louisville stage — it’s my favorite musical, so I should know. I’ve been in withdrawal. The CenterStage theater ensemble at the Jewish Community Center is kick-starting its new season with the 1996 award-winning play that ran on Broadway for 12 years and won both the Pulitzer Prize and the Tony Award for Best Musical. “‘Rent’ is an amazing and powerful piece of theater,” says director John R. Leffert. “The characters are real and very raw, and the story is still relevant and important — all of which makes directing this show a dream for me. ‘Rent’ is what I believe theater should be: It moves you, makes you think, and hopefully promotes change in each audience member.” —Sara Havens

Slow … mellow … thorough … how’s your flow? The “Let It Flow” Poetry Slam is now celebrating its fifth anniversary. So if you’re thinking it’s time for your spoken word to be heard, perhaps you’ll be lured. And if you’re just looking to listen, this should be a great party benefiting a fine cause. This year the event, held at Jazzyblu Café and Lounge (the lower level of the Glassworks building), supports West End School’s work with at-risk young men in west Louisville. Today is the last day to register as a poet ($30 fee if any spaces are still available — with $500 to the winner). For a few dollars on top of the basic ticket price, audience members can sample VIP perks — but all paid attendees get admission to a 10 p.m. after party being held at The Venue at 510. —T.E. Lyons

This female-fronted punk rock outfit from Boston is as indie as they come, having self-recorded every track they have ever released. Despite this, they have more drive and professional finesse than most bands of their breed. Though they have only existed since 2007, they certainly have taken cues from the original hardcore legends over the last five years. Joining Libyans for this special show will be busy punk locals Black God. And just as LEO was going to press, Julie of the Wolves, the new brainchild of ex-Minnow mates Carrie Neumayer and Becca Lindsay, was canceling, likely to be replaced by an equally ferocious group. —Simon Isham

Back for its 15th year, the Louisville Blues & Barbecue Festival will bring the taste of the South and sounds of New Orleans and Memphis to the Water Tower. You’ll hear jams from the likes of The Predators and the Stella Vees, Big James & the Chicago Playboys, and the KingBees. And, of course, what blues festival would be complete without an appearance by the Stray Cat Blues Band? The food will be provided by F.A.B.D. Smokehouse and The Q. “The annual Blues & Barbeque Festival has become a Louisville summer tradition,” says Jennifer Washle, the festival’s event manager. “We’re excited to bring the South’s best music, food and fun back to the community.” Remember to stay hydrated and wear sunscreen. Oh, and don’t forget your dancing shoes. —Kevin Gibson

‘Breaking Up is Fun to Do’

Attention Louisville theater-goers: There’s a new kid on the block. Derby City Dating Scene has brought together some of the city’s best and brightest actors, improvisers, writers, musicians and more to form a new kind of ensemble. Their debut show, “Breaking Up is Fun to Do,” includes short-form improv games, comedy sketches, board games and ample audience participation. Member J.P. Lebangood describes the group as “a resource for people to develop material, a forum for established performers to hone their craft, and a group that can showcase some of the great talent that exists in Louisville underground theater and improv. This isn’t necessarily a group where you sign up to be a permanent member, it is a company where you join for a time to create, perform and grow.” —Jennifer Harlan

Grammy winner Diana Krall brings her unmistakable voice to the Kentucky Center Sunday as part of her 40-city “Summer Nights” tour. Krall has been making critically acclaimed music for well over a decade, following her 1999 breakout album When I Look in Your Eyes, which at the time was the first jazz disc in 25 years to be nominated for Album of the Year. Three years later, Krall’s The Look of Love became a No. 1 album in the United States as well as a five-time Platinum seller in Canada. Her ability to balance commercial success with high musical standards is Krall’s signature. And not everyone can say they’ve produced Barbra Streisand (which went No. 1) or performed on a Paul McCartney album, but Krall can. —Kevin Gibson

And So I Watch You From Afar is a three-piece band from Belfast, Ireland, usually identified by the unusually long acronym “ASIWYFA” in the parlance of their fans. They’re well known for their stage presence and ability to get a crowd on its feet, as well as their often-experimental tracks done in the subgenre called math rock. Having spent the first half of the year touring all over Europe and performing with the Ulster Orchestra, they are now ready to spend the coming months with their American fans. Zechs Marquise, a psychedelic band with a hip-hop attitude from El Paso, and Interstates, a local progressive rock quintet, are joining them on this grand U.S. tour. —Simon Isham

‘Arab and Jewish Women in KY’

If the powers that be required every Louisvillian to attend a couple events at the Iroquois branch of the public library every year, want to know what would happen? Possibly some mad libertarians, but definitely a more culturally sensitive, aware community. Next Wednesday, Nora Rose Moosnick discusses her book “Arab and Jewish Women in Kentucky: Stories of Accommodation and Audacity.” One might suspect these two groups would have an adversarial relationship, but the book explores the very similar paths Arab (both Christian and Muslim) and Jewish immigrants have traveled in Kentucky. Intimate portraits illuminate the women’s overlapping lives and shared humanity. Furthermore, it proves vibrant diversity exists in Kentucky. Moosnick is currently a visiting scholar in the department of sociology at UK. —Anne Marshall

New Jersey artist Benjamin Cohen really likes people. He’s been observing us for most of his 89 years, then capturing what he sees in pastels and watercolor. He’s into ordinary people living their ordinary lives — going to the market, heading from place to place, talking to friends. This is the stuff of life, what we in the art world call genre scenes. “My mission is to glorify the ordinary, the things we all take for granted,” says Cohen. “I’m not about intellectualizing or being obscure. My goal in art is to be accessible … I try to make the viewer ‘wake up’ to life as we know it.” Weber Gallery is also showing work by Julie Baldyga and Donna Sherley of StudioWorks and Trent Altman. —Jo Anne Triplett