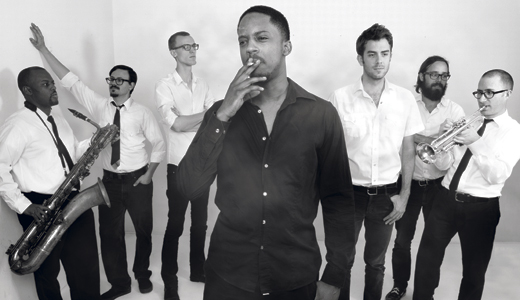 Dan Cassaro has a way with words. The Brooklyn-based graphic designer has created logos, illustrations and other custom typography and art for MTV, VH1 and publications such as Fortune, Nylon and The New York Times Magazine. With his one-man design studio — Young Jerks — Cassaro works under a self-professed mission of “putting words on paper so that they might be accountable for themselves.” Cassaro’s work has received high praise and awards from Rolling Stone, Esquire, The New Yorker and more, and Matt Dobson, president of the Louisville Graphic Design Association, describes his work as “smart and inspiring,” adding, “There is a certain look to a lot of work that is happening right now, and Dan Cassaro is leading the pack and setting the curve.” Cassaro’s lecture gives Louisville audiences the opportunity to hear this young innovator’s take on graphic design in the 21st century. —Jennifer Harlan

Blues-rock steeped in Memphis soul, Black Joe Lewis should have a much larger following than he has been able to collect thus far from his two Lost Highway releases. His blend of Muddy Waters, James Brown, and ABKCO-era Stones is infectious and made for the stage. His last record, Scandalous, is so much fun to listen to that it makes you walk with a lean, especially powered by two or three bad decisions in your system. Sure, it’s a Thursday show, but face it, you’re still recovering from this past weekend’s Forecastle, so go ahead and ruin Friday morning. It’s not like you were going to do anything productive with your day besides, what, work? —Damien McPherson

I imagine prison might be a lot like a circus — but not in the fun spectator kind of way; rather the caged, lonely elephant way. Local actor Eric Welch touches on this scenario in his first production he wrote with longtime friend Brian Walker, titled “Circus Circus.” The protagonist is arrested for having marijuana and sent to prison, where he becomes immersed in a world of degradation, chaos, violence and loss. The show will be accompanied by original music and video imagery on multiple screens. “Much like a circus, we have prepared a night of entertainment,” Welch says. “‘Circus Circus’ is a one-of-a-kind original play, and we hope those who come out will enjoy the show.” —Sara Havens

Seven Counties Services, the Mayor’s Healthy Hometown Movement and other sponsors will celebrate mental health and wellness with Shine On Louisville, a free concert at the Bomhard Theater on Friday. This family-friendly event will feature local young talent such as the River City Drum Corps, Lincoln Elementary Performing Arts School, blues band Winnie and the Mojo, Latin fusion band Appalatin, and flutist Loren Been of the Youth Performing Arts School and Louisville Youth Orchestra. Complimentary beverages and snacks will be served before the performance, and seating is first come, first serve — so don’t be late. —Kevin Gibson

Can you think of anywhere better to see Kentucky Knife Fight than … in Kentucky? (The Mag Bar would also suffice as an answer to that question.) The St. Louis-based (yeah, I said it) rock ’n’ rollers are coming to give us the what for, though their grasp of basic bourbon drinking etiquette may not be up to snuff (Google it, Missourians). But maybe we’re being too wary — former local Pokey LaFarge, America’s Riverboat captain, does live there now, too. And the Riverfront Times have named them “Best Rock Band” twice, for what that’s worth. And, their new single is called “Misshapen Love.” Plus, it’s The Ladybirds’ first performance at the Mag Bar (wha???), and a chance to catch new songs for an upcoming release. Plus The Tunesmiths, so that’s a hell of a night. —Peter Berkowitz

“All dances will be taught. Everyone will have fun. No one is required to dance, but everyone is encouraged to try it out. No experience necessary.” T-Claw will be calling the traditional Appalachian dances here (“calling the shots and teachin’ the trots”). Vermont’s Fiddle Pie and our own Trappers Keepers will play the tunes, in the dance hall room next to Danny Mac’s Pizza in the heart of Schnitzelburg. A beginner’s dance workshop starts at 7:30, with dancing at 8. AmVets members get in free. This event is partially sponsored by The Lloyd Shaw Foundation and The Country Dance and Song Society. “If you know any rich people, get them to contribute to our local dance community or the larger funds that these orgs have set up to support traditional dance around the country,” say the organizers. —Peter Berkowitz

In case you’re not a baby boomer, theater queen or vintage culture aficionado, the original play “The Odd Couple” basically runs with the idea of two mismatched roommates — one a slovenly sportswriter, and one a neat-freak newsman — who find themselves living together after the newsman’s wife kicks him out. Twenty years after Neil Simon wrote the original Broadway blockbuster, he wrote a version for two female roommates. In this revamp, Oscar and Felix became Olive and Florence. The poker game with the boys became Trivial Pursuit with girlfriends. The English Pigeon sisters from upstairs became Latino brothers Manolo and Jesus Costazuela. The framework set by the original basically carries from old to new, but with the added opportunity to delve into gender dynamics. This is a production by the As Yet Unnamed Theatre Company. —Simon Isham

The Dude abides this weekend at Lebowski Fest, where achievers donning their finest terry cloth will gather to enjoy live music, bowling, trivia, and, of course, a screening of the Coen Brothers’ cult comedy that inspired it all — “The Big Lebowski.” Punk marching band Mucca Pazza and Mesiko kick off Friday’s festivities, followed by the film, with Todd Snider, The Deloreans and The White Russians performing at Saturday’s Garden Party on the Executive Lawn. Speaking of White Russians: The Dude’s drink of choice will be flowing throughout the fest, which culminates with a free after-party Saturday night. Check lebowskifest.com for more details on times, tickets and severed toes. —Sarah Kelley

‘Our House’ by Joel O’Dorisio

We talk about the environment a lot today, from global warming (hello, hot summer) to the lifespan of a plastic bag. Glass artist Joel O’Dorisio has long thought about it. One way the environment shows up in his work is when he creates molds from tree bark that he incorporates into his cast glass sculptures. “From an early age, I have wrestled with the fact that aspects of both worlds please me,” O’Dorisio says. “Yet, under most circumstances, nature and urban civilization do not coexist peacefully. ‘Our House’ is an effort to re-link the concept of environment and shelter in the digital age and start a conversation about how we view our place in the world.” O’Dorisio is giving a free gallery talk on Saturday, July 28, at 10:30 a.m. —Jo Anne Triplett

Nonrepresentational abstraction gets right down to art’s building blocks of color and form. With an exhibition title like “Explorations in Mark Making,” you know the paintings and drawings by Emily Church are back to the basics. “I search for phenomena in nature and urban life that urge me to capture in visual form a moment in time, in memory, an event, a mystery,” she says. “As the pieces evolve, they take on the artificiality of urban environments, the artifice of painting itself, and the collision of nature with the man-made. By referring to the history of art through the manipulation of the formal elements of painting, and by twisting the context of knowable objects, my work creates a space and an atmosphere that are both specific and unnamable.” —Jo Anne Triplett