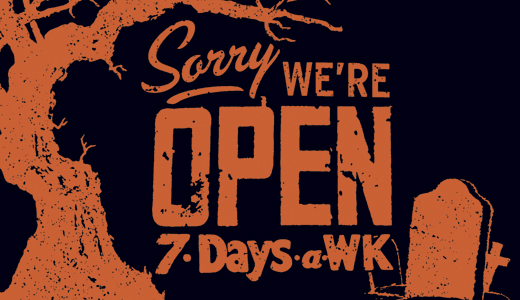 While the Kansas City native slowly chips his way into rap’s mainstream, Tech N9ne has not forgotten his bread and butter: Midwestern shows for and featuring Juggalo-friendly fringe acts. Tech fans will know the other acts on his “Hostile Takeover” tour — Krizz Kaliko is the Ghostface to Tech’s Raekwon, appearing as much on each other’s records as the headliner. A guest appearance on Lil Wayne’s last album and an invitation to BET’s annual award show cypher have gone a long way to breaking away from the “weird” stigma of posses of insane clowns and the morbidly deranged topics so many are trapped in. Tech is a nimble, skilled emcee with a strong live show and a consistent catalogue. And once you’re already filled with barbeque and spirits, where else are you going to find a mosh pit in a hurry? —Damien McPherson

Take those sun-stroked hands of yours and wipe those 103° tears out of your eyes, because there is nothing funny about what is going on outside. But inside at The Improv, it’s funnier than the summertime hell that has invaded our fair city when Jay Pharoah rocks the stage this weekend. The Virginia native became a New York transplant after being cast by network/comedy legend Lorne Michaels for NBC’s “Saturday Night Live,” a role he got on account of his countless spot-on celebrity impersonations. He has also performed on “The Tonight Show with Jay Leno” and BET’s “One Mic Stand,” as well as starring in the film “Lola Versus.” So get your red, peeling asses downtown this weekend and laugh those insipid tan lines off with Pharoah. —Brent Owen

Tim Faulkner’s new location in Butchertown is larger than life, a lot like the man himself. The industrial complex, formerly the Union Beer Brewery, has more than 10,000 square feet of space that is home not only to the gallery but artist studios, “Simply Real” sustainable grocer, Matt Anthony’s Record Store, Makeshift Clothing, and the office of Pure Uncut Candy. The gallery’s main space is showing the work of two sculptors. Wyatt Gragg’s “Contours” features casts of the body’s creases, details and textures. It’s a new take on an old artistic subject matter — the human body. Both physical and mental pain is the territory of Charles “Chad” Steier in his exhibition “Healing.” The second floor space is featuring the group show “Phantasmagoric” curated by artist Eli Jeter. —Jo Anne Triplett

I know when I read the title of this exhibition, I wasn’t thinking of glass. Seems other people have a similar problem. Glass artist Jason Chakravarty has a long history of people mispronouncing his name; apparently Chakravarty doesn’t sound like “chocolate party.” As distinctive as his name is, I think the fact that he creates astronauts in cast glass illuminated with neon gas is right up there as well. “The astronaut who may be sitting on a park bench, carrying a canoe or climbing a ladder represents each of us and our metaphorical journey through life,” says Chakravarty. “I want people to put themselves in the astronaut’s place …” The opening reception is during the July 6 First Friday Trolley Hop, with a demonstration at 7 p.m. —Jo Anne Triplett

Since 1996, DeaFestival has been celebrating deaf art and culture throughout the state of Kentucky. Its 10th iteration comes to Louisville this weekend, showcasing the visual art, theater, dance and music of deaf artists. An expected 10,000 visitors will flock to Louisville for the event, which includes live performances, stand-up comedy, art galleries and more. Virginia Moore, executive director of the Kentucky Commission on the Deaf and Hard of Hearing, says she hopes the event will allow visitors “to get a glimpse of what helps form a deaf artist’s vision, whether it is on the stage in song or drama or on canvas in paint or charcoal.” The event serves to raise awareness about the deaf culture and the human rights struggle facing deaf and hard of hearing communities around the world. —Jennifer Harlan

In order to properly celebrate its fifth anniversary, quirky local boutique Ultra Pop has asked graphic designer and Louisville native Ryan Patterson to put on an art show — his first in his hometown. Patterson will be exhibiting both old classics and pieces created specifically for the show, many of which will be for sale. In addition to his instantly recognizable two-tone prints, Paterson has done a lot of work on band T-shirts and album covers during his already-prolific career. His credibility in this arena is rooted in his work in the three bands he’s a part of — Coliseum, Black God, and Whips/Chains. If an art show weren’t enough for one day, Patterson will take the stage at 10 p.m. with Coliseum. Also, Tattoo Salvation, located right next door, will be running a special on a new custom sheet of Ultra Pop-inspired designs. —Simon Isham

The name “Salsa, Soul, Sushi & Samosas: Celebrate and Connect with Louisville Diverse Professionals!” should give you a good indication where this night will take you, though surely little planning can help you get ready for eating samosas, then sushi, followed by dancing to Salsa music (with soul, I guess). Too many good things in one place? Or just right? Either way, this promising event is the first attempt by this group to bring together urban professionals from diverse backgrounds who might not otherwise get a chance to meet and network (like the tween Skrillex fan who stumbled into the Kenny Rogers set at Bonnaroo). Includes live music from local Cubans Grupo Ache, Nachale’s Bollywood dancing, and a DJ set by Baltimore’s DJ Maxik to help those bites go down just right. —Peter Berkowitz

Playing smaller rooms might not be ideal for your Arcade Fires and Lady Gagas, but the intimate neighborhood tavern Zanzabar is ideal for atypical acts like Shovels & Rope. The duo from Charleston, S.C., touring in support of their upcoming album, O’ Be Joyful, make a big noise with little: two voices, two guitars, harmonicas and — if you believe them — “a junkyard drum kit harvested from an actual garbage heap and adorned with tambourines, flowers and kitchen rags.” Cary Ann Hearst and Michael Trent had both begun establishing careers before pairing up, and it’s a smart move. Last year, they toured with Justin Townes Earle, The Felice Brothers, Jason Isbell, and Hayes Carll, all alt-country rebels laying their own paths. This time, they headline with Wild Child opening. —Peter Berkowitz

For a man who is so tall and wears bright colors, it’s amazing how many times Waldo gets lost. But people have been searching for Waldo since 1987 — when Martin Handford debuted the “Where’s Waldo?” children’s book that challenged readers to find Waldo in various street scenes. Since then, Waldo has become a video game, a popular Halloween costume and commandeers a regular spot on bookshelves, since there are now more than 55 million Waldo books in print. Carmichael’s is celebrating Waldo’s 25th anniversary with a “Find Waldo Local” contest, where participants must search for Waldo in several local businesses, including Lynn’s Paradise Café, Comfy Cow, Homemade Ice Cream & Pie Kitchen, Wild and Woolly Video and more. Pick up your game card at Carmichael’s and get busy looking for the man with blue jeans and a red-and-white-stripped shirt. —Sara Havens

Joyce Howell Young, a noted photographer with more than 20 years behind the lens, brings her stories to life through vibrant sharp images familiar to residents of Louisville — of horses. This exhibit tells the story of Young’s aspirations to show her passion for both unique lighting techniques and her choice of subject matter. The Wayside Gallery invites Young to showcase her eye for balance with photographs of thoroughbreds as they chase the dreams of their owners on the track. The views are focused through the lens, as only the lens can see. This focus allows the brain to process images without filtering, a pure look at the subject without judgment. —Allison Ray