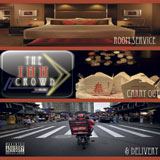 The latest in a multitude of releases from the Triple B camp, trio project Room Service is a mixture of the good and bad ideas from last year’s output. Again, it’s too long by at least five songs. There’s an overabundance of sex, to the point of obsession, that wears thin after a while. (Is “Porky’s rap” a genre?) Equally, when it’s good, it shows a group with great potential. They need to stop throwing the kitchen sink in with every project and slow down their output. Aim for 10-15 truly great tracks, release those, and then work the hell out of it. Just because you record it doesn’t mean you have to drop it. Their recent method of tossing every string of spaghetti against the wall to see if it sticks isn’t what works.