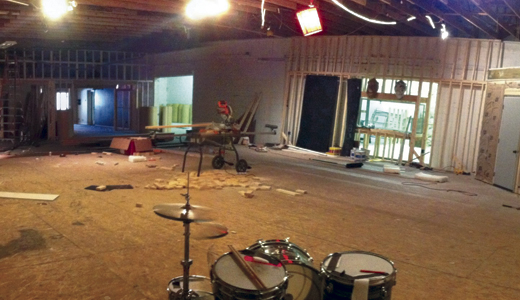 For eight years, Kevin Ratterman operated a recording studio, The Funeral Home, on the second floor of his family’s actual funeral home, recording or producing for My Morning Jacket, Young Widows, Ben Sollee, Daniel Martin Moore and Coliseum, as well as his own bands Elliott and Wax Fang.

“I’m super thankful to my dad for letting me be there,” he says. “But the fact of the matter is that there is a business downstairs, and it’s not possible to run a studio out of the second floor of a business. I’d have bands coming from out of town and have to tell them, ‘We can’t start until 5 o’clock’ … it was just asking a lot of the people I work with to stay up till 4 in the morning.”

Recently, he’s been recording in a church gymnasium while preparing to open a new studio. He’s building it from the inside out with help from friend Adam Kramer. “We’re both Pisces,” Ratterman says, “so we’re bad at planning things out. We’ll come together and look at a wall, and Adam will ask, ‘How many 2x4s do you think we need?’ ‘Oh, let’s start with 2,000.’ ‘Oh, that went quick.’ So we’ve just kind of been designing everything on the fly.”

They’ve been using as much recycled material for the new space as possible. “I’ve always worked in houses and older spaces, so my biggest fear was getting in here and having it feel like a warehouse, and then doing all this construction and having everything feeling new and shiny,” Ratterman says. “How do we make it feel old and fucked up and cozy and weird?”

The transition from the “com-partmentalization of the Funeral Home” — where each instrument had to be placed in its own room — to a wide open yet intimate space is a welcome change. At the Funeral Home, “There was no eye contact. This place is all about line of sight. The musicians can all be in one room and be able to look at each other in the eye,” Ratterman says.

“There are plenty of places with great gear and enough adequate stuff, but to find a place where you can track a lot of things live, and having a lot of options, from playing live to doing isolation — this is a place where we have all of those options. You can record a 10-piece band, no problem, and everyone’s got space.”

Inside the unfinished space, two plush tiger heads hang over what will become the sound booth. The kitschy costume pieces are mementos from a Wax Fang show at the Lexington club The Dame on its last night of operation.

It was a frustrating night for Ratterman, who was planning to make a live record of the performance using his gear. His day began at 6 a.m., “so excited,” but computer problems resulted in multiple back-and-forth trips between the super-region cities, bringing a dejected Ratterman back to Lexington just in time to walk on stage.

“It was one of our best shows ever, and we couldn’t record it,” he laments. “On the way home, I was so bummed. The guys found these heads at a gas station, and they bought them for me as a consolation prize. (My Morning Jacket leader) Jim (James) has since fallen in love with them and has his own now. They played Red Rocks, had them on stage, and somebody stole them. His mom drove around the country and ended up replacing them all.”

Ratterman and his tigers plan to be open for recording in mid-August.