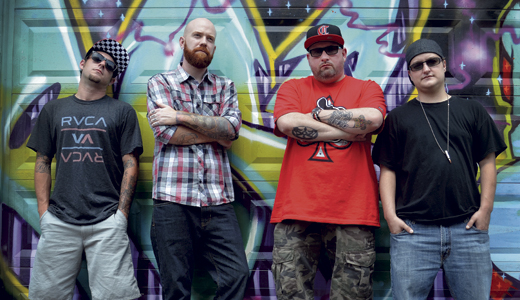 You work so hard for one goal, and — that quickly — it’s gone. The ego hit of coming back home is almost too much to bear. Every rapper talks about the “next level”; no one ever talks about having to take a step back to regroup. But like “Inception,” dreams can manifest in many ways. So what if the major didn’t work out? You put out a record and made thousands of people aware of your name. Pack up your toys, sure, but go home? No. Go harder.

“It was always our dream to own a record label,” says Villebillies manager Will Walk II. “So after we parted ways with Universal Records, we knew it was time for us to do it ourselves.”

Island Earth Music, the label founded by Walk and Villebillies members Demi Demaree and Dustin Tucker, formed in the aftermath of their major label deal. Island Earth is not just the machine behind Villebillies releases, like their latest, Appetite for Dysfunction, but also a fully functioning label, studio and marketing company. It allows for the group’s members to have different outlets in different genres and touring configurations.

“We all have different passions in music,” Walk says. “This gave us the opportunity to (say) you don’t have to just do Villebillies; you can do any form of music that you want to express. It has been a breath of fresh air for the guys being able to explore their musical passions.”

Believe it or not, it’s not easy to tour a seven-member band with day jobs and families without commanding Rolling Stones-size guarantees.

“The Villebillies have realized that touring is not an option for a group (their size),” Walk says. “So we are looking to get a few of the other groups out on the road.”

Appetite and Derek Monyhan’s Gentlemen Hounds’ album are in stores now. Elephant Room and Bass Drum Aliens are poised for a late 2012 release. It’s a full and ambitious schedule, with releases from Demaree’s rock group Iron Bells and emcee J-Monkey in the queue.

Walk isn’t concerned. “We are focusing on the people we have now so we don’t spread ourselves too thin. We do a lot of things in house, so it saves our budget for more important things.”

Building a new label in this atmosphere is no feat for the fearful, but Walk is confident. “We knew the Villebillies’ fan base was our biggest advantage,” he says. “We built the name up from nothing and knew it would be vital for getting new music out. We can knock on doors most people can’t.

“My goal is to create a place where people can make great music and can have the help that most people aren’t able to get,” Walk adds. “Having a team is something I learned early on makes the world of difference. This is a team and can only work as one force moving in the same direction.”