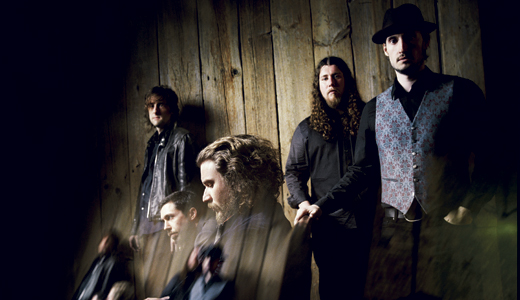 The day before My Morning Jacket’s co-curated Forecastle Festival lineup was announced, LEO printed a hypothetical list of performers. “I saw that article!” exclaims Patrick Hallahan, the band’s drummer and a driving force behind the local elements of this year’s festival. “I know it’s not hard to imagine; all you have to think is, ‘Who have they toured with?’ … You were pretty dead-on with a lot of it.”

A visit to San Francisco’s Outside Lands festival proved inspiring. While the Californians were proud to show off their wines, the Kentuckians plan to have bourbon showcased. “I was trying to get a batting cage in there as well,” laughs Hallahan. “But bourbon and batting cages started to sound like a bad mix.”

Both My Morning Jacket and Forecastle have incorporated local vendors, nonprofits and artists into past shows, so it was a marriage waiting to happen. Still, like any relationship, both parties brought some of their own needs into the union. Both festival producer AC Entertainment and Forecastle captain J.K. McKnight had their own lists.

“We had to counteract it as well as blend in with it,” Hallahan says, suggesting it was about “half and half” when it came to how many performers the band selected. “We definitely had our pick of the Louisville bands and the regional bands, and I think they were picking more headliner (level) acts.”

What’s surprising is that this is My Morning Jacket’s first Forecastle. “We were always on tour,” he says. “It took 10 years, but …”

The band will have a fixed set time of two-and-a-half hours when headlining Forecastle on Saturday, so Hallahan laughs at the suggestion that the band might try to top their four-hour Bonnaroo 2008 set.

“The theme of this show, and this entire tour, is the Spontaneous Curation series,” where fan club members write in their wish list for songs they hope to hear. “It’s basically a set-list request line for (a) particular show. Honestly, we’ve received so much feedback for the Forecastle set, we could probably make 20 lists for that show.”

He laments that the Stax! Soul Revue, the all-star band of Memphis greats originally scheduled to play, had to cancel after the death of bassist Donald “Duck” Dunn, but he’s excited to once again see his new friends in The Head and the Heart (“a fantastic live band”). He’s also curious, like many, to see how Beach House bring their subtle sound to a large, outdoor audience. And he’s in awe of the Preservation Hall Jazz Band: “That goes without saying. If you don’t have a smile on your face while they’re playing, you don’t have a heart.”

He goes on to praise others — Dr. Dog, Andrew Bird, Neko Case, Kelly Hogan, Justin Townes Earle, Orchestre Poly-Rythmo, Charles Bradley & His Extraordinaires — displaying how thin the line between fan and star can be. “I haven’t seen King’s Daughters & Sons live yet, so I’m really looking forward to seeing them. I love everybody in that and have been a fan for years, and I love their album.” He also will be seeing ex-Jacket guitarist Johnny Quaid’s band The Ravenna Colt for the first time. “I’ll have rotten produce waiting for him,” he jokes.

It’s been a long, strange trip for Hallahan. His first “real” show in Louisville was circa 1995 at the Cardinal Inn. His band, Chocolate Jones and the Temple of Funk, opened for “probably Hedge” to a few dozen people “all on the perimeter, hanging out, waiting for Hedge to play,” Hallahan laughs. “We were doing our best Jesus Lizard rip-off we probably could, I think.”

Seventeen years later, even without a new album to promote, the drummer is pretty busy. The band just returned from a European tour, has more dates planned through the summer, and Hallahan will have to go out of his way to celebrate his daughter’s first birthday. It’s a big year, but he says, “I like a full plate.” It’s the 10th year for the festival, and Hallahan’s 10th year with the band, so “It’ll definitely be an emotional show for me.”