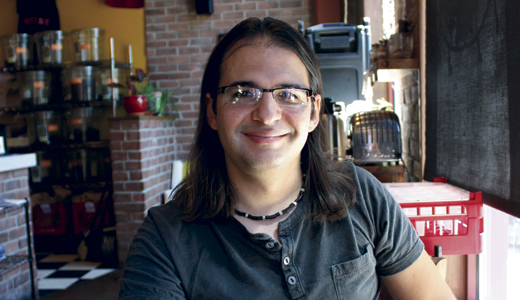 Colored lights filter through exposed wooden beams. Frank Sinatra smiles down from black and white photographs adorning the walls. On this Thursday night, the SkyBar in St. Matthews feels like the Rat Pack’s Havana clubhouse. A sign behind the stage invites guests to “Unleash your flavor!” The bartender steps up to the microphone, invites the expectant crowd to join him in welcoming Cosa Seria, and, with a fanfare of trumpets and congas, we’re off.

For six years, Cosa Seria has brought vibrant Latin music to the Louisville scene. The band’s seven members — Joanna Garcia, Alberto Abril, Abel Delgado, Mike Smith, Yoan Paumier, Johnny Castaneda, and leader Rafael Lopez — hail from near (La Grange) and far (Panama and Cuba). Brought together by a love of Latin music and a passion for expert musicianship, their dedication is reflected in the band’s name, which translates to “serious stuff.”

The musicians have all had extensive formal training, and they take their craft seriously. Lopez explains, “This is not a hobby for us. Most of us make our living from music, and our goal is always to get to a higher level musically.”

The group has certainly made significant progress over the past few years. Playing a mix of salsa and timba, a Cuban blend of Latin rhythms with funk and Anglo music, they started off primarily as a cover band, playing standards and songs from the Latin tradition. More recently, however, they have started to move toward more original compositions, many written by Lopez. These pieces are slipped into their sets without introduction, allowing the band to gauge their audience’s unbiased reactions.

This lack of introductions is characteristic of Cosa Seria’s entire set, a 45-minute marathon of virtually nonstop music. This stems primarily from the fact that salsa is, first and foremost, dance music. Brief musical interludes between numbers give people a chance to catch their breath, but soon they are thrown right back into the rollicking, hip-swinging rhythms of the infectious music.

The quality of dancing at SkyBar is impressive, with dozens of enthusiastic dancers swirling across the spacious floor, their fluid movements punctuated by dips and spins. Cosa Seria has partnered with Gabriel Scott to offer salsa lessons before their weekly shows, with classes running from 7:45-9:30 p.m., allowing dancers to then test out their new moves as the band plays into the night.

Though SkyBar has a lounge atmosphere, with large, inviting leather couches lining the walls, by the third song in the set, everyone is on their feet. The music seems to catch you somewhere in your pelvis, pulling your hips into the serpentine rhythm and spinning you onto the floor. Even the band dances along, the brass section performing a delicate cha-cha as they wait for the bridge.

The music is colorful, vibrant, full of flavor. It forces you to engage. Case in point: Of all the Louisville bars I’ve ever been to, this is the only one I’ve seen where nobody is paying attention to the big game on TV.

Cosa Seria plays at 8 p.m. Sunday on the Glassworks rooftop. Tickets are $10.