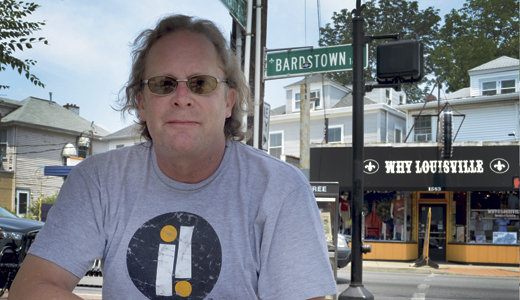 Don’t call it a retirement. At 56, John Timmons is no longer the ear X-tacy guy, but he’s still got a lot of years left, as well as bills left to pay from the beloved record store he owned and operated in the Highlands for 26 years.

These days, Timmons spends his time with family and friends, diving into Facebook, cooking, practicing guitar, and rediscovering the pure, simple joy of listening to music for pleasure. And though he’s truly resting and relaxing for the first time in years, he’s also working to discover a new identity.

He recently visited two new record stores, Astro Black and Matt Anthony’s Record Shop. Anthony had worked at ear X-tacy for a decade. “I was shoplifting,” Timmons jokes. “No, I bought some CDs. Trying to support some folks as best as I can.”

Timmons is now experiencing the normal fan’s dilemma of trying to support a local business when it doesn’t have the specific title the customer is looking to buy.

“The problem for me now is, where do I go to buy my music? Some of us from the store have been ordering from other indie stores (in other cities and online) … I prefer to buy as local as I can, but …”

At the end of 2011, when Timmons closed the store’s doors for the last time, he walked out into a world where AARP-eligible former small-business owners don’t have many options. “One of the hardest things was going from being there seven days a week to … nothing. Dealing with the aftermath of that, but — I need to be doing something.”

Though Timmons has had plenty of experience running a small company, he refuses to open another business. Ideally, a new job would be something easier but still fun. “The reason I stayed with the store for so long was that I felt passionate about it. I would want to do something music- or art-related. No physical labor,” he laughs.

This past spring, WFPK program director Stacy Owen contacted Timmons to gauge his interest in trying radio. Though he had dabbled many years ago, it remains a relatively untried field for the self-effacing Timmons. DJ Duke Meyer has been training Timmons, who now fills in for Meyer and others when needed.

Timmons also has an idea for his own weekend show, if the station is interested. But public radio doesn’t always pay the bills, and in addition to his personal obligations, there are still ear X-tacy issues to resolve — specifically, bills. “It’s gonna take a bit of time. They’re all gonna get paid … I feel worse about the local stuff, but some of them got paid, and then the accounts got on lock-down.”

Does he have a timeline for final payments? “No.” There are lawyers and accountants dealing with it, at this stage, but Timmons is firm that “local artists will get paid.” Most have been sympathetic, he says. Some, who are owed small amounts or can otherwise afford it, have even told him not to worry about it. A few have made their unhappiness known.

He’s aware of what people have said, online and otherwise.

“After closing the store, I can see it a lot clearer now, what it was when it was there,” he says. “As an owner, you see everything that’s wrong with it — how it can be better. Now I can stand back and certainly appreciate it and be proud of it … I can see how other people saw it, for better and for worse, but it’s nice to have people come up and say, ‘God, I miss that store.‘"

“I miss the store every day … I miss a lot of things about it, but then again, there’s a lot I don’t miss.” He misses the community of it all. “The staff, and the people coming in. That’s what it was all about.”