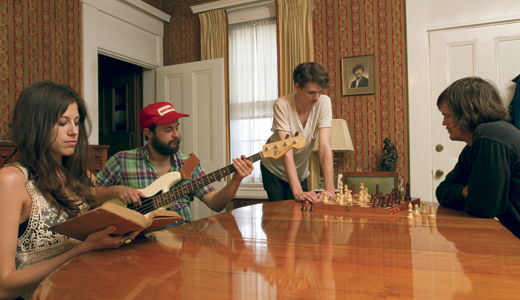 The New Albany music scene scored a big breakthrough in 2012 when a brand new rock ’n’ soul quartet, Houndmouth, went from zero to 160 faster than Dale Earnhardt Jr. being chased by an angry ex-girlfriend.

In the summer of 2011, bassist Zak Appleby, drummer Shane Cody, guitarist Matt Myers, and keyboardist Katie Toupin (all of whom also sing) had not yet become a band, and neither Appleby nor Toupin were even playing their current instruments. Fast-forward one year, however, and the London-based Rough Trade Records label is set to release the band of 20-somethings’ first self-titled EP, which the band recorded in a studio they built here.

While their sound — organic, rootsy rock reminiscent of classic late ’60s acts like The Band — is in vogue thanks to bands like Mumford & Sons and Alabama Shakes, while not far removed from The Black Keys and Jack White’s no-frills solid rock, Houndmouth is a modern band that has capitalized on the Internet to find an audience, both here and far away.

They recruited a high school friend, Chris Thomas, as their manager. He sent their songs to a few blogs, and within a couple of months, people began discovering them. “It really just kind of snowballed with the blogs,” Toupin says.

“I was actually looking for a job online, and I got a text from Shane that said, ‘We got a blog write-up!’” Myers adds.

They’ve since opened in other cities for The Lumineers and Those Darlins, and will play both a Forecastle pre-fest show Thursday at Zanzabar and a Friday night slot at the festival. They hope to tour around the country and possibly in Europe in the fall and winter.

Ultimately, it was their music — performed live before an industry-heavy audience at South by Southwest in Austin last March — that made them.

“We met Geoff Travis from Rough Trade,” Toupin says, perhaps not fully aware yet that her new boss has been in the music business since before the band members were born, “and he loved it.” Rough Trade has also recently released albums by Arcade Fire, The Strokes, The Decemberists, Alabama Shakes, and My Morning Jacket, to name a few.

Travis had seen the band on the first night of the festival, and then left Bruce Springsteen’s keynote address early the next day to see the band again. They played that afternoon to “about 30 people,” (including a LEO reporter), and though Travis missed that set, he offered a contract.

While their shot at the big time seems to have happened overnight, all four have paid their dues over several years of playing everything (Motown covers, bluegrass, hardcore) to oft-empty rooms. “A lot of wineries” is how Myers efficiently sums up their early years, back when Appleby and Toupin were still guitarists.

And the name? It’s probably fitting, as it implies an earthy, hungry animal as well as being goofily meaningless. What began as a late-night remark by Cody has become their career.