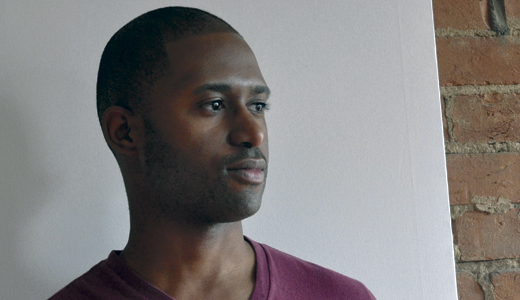 He’s a graphic design major in his final year at the Art Academy of Cincinnati. Beyond turning in school assignments, the Male graduate has been building up a sizeable portfolio for tastemakers like the Saving Our Style blog, The Aviation and others. Upon graduation, though, he’s wondering if design is what will pay his bills. Josh Nicholson has been moonlighting in another field, one that continues to show more promise with each new project. Nicholson is also Josh La Rock, producer for Jalin Roze, Tarik Adams and J Cannon, and he’s built one of the region’s most exciting aural portfolios of the last decade.

With graduation looming and a highly anticipated new record with Roze nearing completion, La Rock is looking at a fork in the road, one that he may not be able to straddle forever.

“I’ve been thinking about that a lot lately,” La Rock says. “I want to be my own boss at some point (and) start my own studio/firm. I’m not sure what getting there is going to look like, but that’s the goal.”

Asked what would happen if that phone call were to happen tomorrow, saying a deal is in place, he says, “(That’s) actually what my senior thesis work is about — how I’m at an interesting place right now because I’ve managed to pursue both music and design, and either one of them could take off. I love doing both.”

The work he’s done with Jalin Roze is of such high quality you’d think the budgets were astronomical, the studios world class. In reality, La Rock works only on a PC, using the digital audio editing program Fruity Loops. The vocals are recorded in Louisville with engineer David Soards. The 2011 album The Brilliance is their most recent project, the most collaborative to date. Before, La Rock would put tracks together and send ideas back and forth through Facebook and email; with Brilliance, Roze would bring sample ideas (such as The Bird and The Bee’s “Polite Dance Song” on “Give It Up”) for La Rock to perfect and mold.

Next up is Grand National Dreams, a year-in-the-works project that should see daylight by the beginning of August, and whose title states clearly what the next step should entail.

It’s not a bad look for a couple guys who first met through pick-up basketball games, while La Rock’s cousin Justin was in the house making music. Curiosity got the better of young Josh, who peeked in and eventually learned the ins and outs.

“He showed me a lot in the beginning,” he says of his cousin. “I didn’t have the software or a computer of my own back then, so I would go over to my aunt’s house just to watch him and pick up on things.”

Time and geography separated La Rock and Roze until chance encounters brought them back right around the time of Roze’s The bLOUprint, his debut release, an album of original verses over Jay-Z instrumentals. With a wide-open future and opportunities looming, what does the design student think of his relative anonymity?

“I’m not really built for the spotlight. That’ll never be me. We work hard, so I can appreciate the recognition. But I started doing music as creative outlet.”